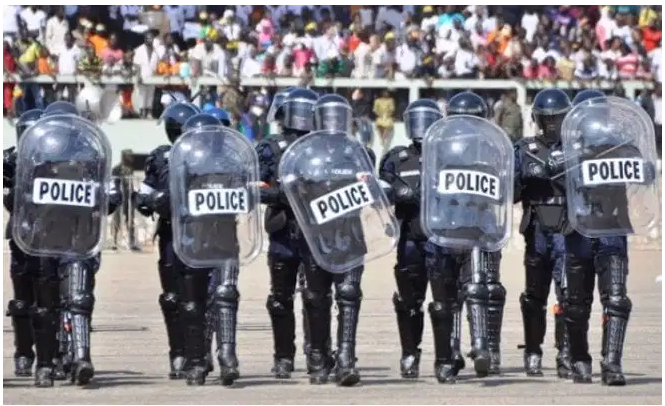 A 3-member police patrol team have robbed a young man at gunpoint at Haatso, a suburb of Accra after they initially stopped and searched him for driving a sleek Mercedes Benz with DV registration 2508.

The incident occurred on Friday 21st May at about 11:20pm when Abdullai Ibrahim, the victim, a resident of Ashongman near the Ashongman Community Hospital was driving his unregistered Mercedes Benz with trade plate number DV-2508 from Ashongman to the Legon Hospital.

On reaching a section of the road in front of the Haatso Branch of Ecobank, off the Atomic-Madina road, the three policemen using a Police service vehicle stopped him and searched his car.

After the search the policemen “arrested” him and accused him of being a cyber fraudster or “sakawa boy”.

According to a site report sighted by MyNewsGh.com, two of the policemen handcuffed him, seized his car and his mobile phone, put him in his own car and one of the policemen took over the steering wheel.

They escorted him by force and at gunpoint to two ATMs of Stanbic Bank at the Silver Star Towers-Airport and Okponglo.

The other policeman followed with the police car.

At gunpoint they forced him to withdraw cash the sum of Ghc18,000 from his Stanbic bank account with ATM, which they took from him.

The policemen after receiving the money released the complainant’s car and his mobile phone to him and left in victory.

The victim Abdullai Ibrahim could not pick up the registration number of the police vehicle, but police investigators have placed a request for CCTV footage to the management of the Haatso branch of Ecobank for assistance following an official report by the victim.

In addition police information room has been contacted for assistance.