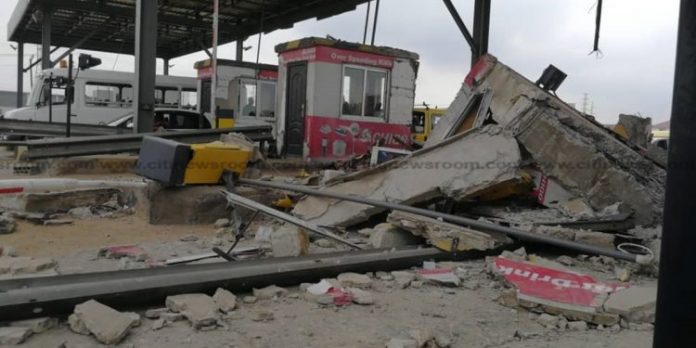 The cleaner who was severely injured in an accident involving a tipper truck on the Accra-Tema Motorway has died.

Isaac Koomson, a 56-year-old man who has a hearing and speech impairment, was left with serious injuries to his legs and hand after the truck rammed into one of the booths on the Accra-bound side of the highway on Monday morning [July 12, 2021].

He has been confirmed dead at the Tema General Hospital shortly after admission, according to Citi News sources.

Mr. Koomson was trapped in the debris. It took bystanders’ intervention to pull him out.

He was left lying on the ground helplessly, with many onlookers at the scene, before he was taken to the Tema General Hospital.

Son of the deceased, John Koomson had earlier spoken about his father’s harrowing ordeal.

“This morning, I received a call that my father has been involved in an accident this morning. He is deaf and dumb, and can barely do anything. So I rushed to the hospital only to see that both legs have been smashed.”