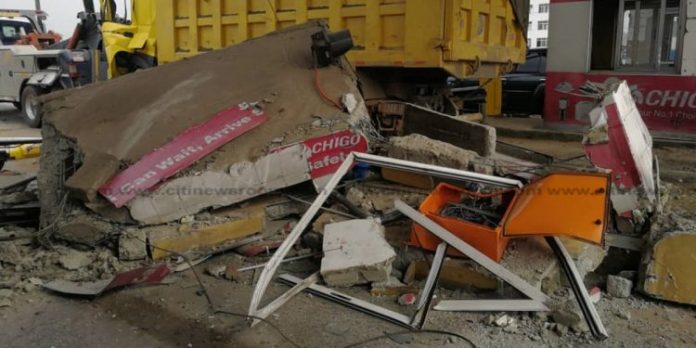 Toll collection at the Accra-bound side of the Tema motorway has resumed, almost four hours after traumatised staff suspended collection after a tipper truck crashed into the tollbooth.

Drivers who ply the stretch were allowed to move free of charge after the incident.

Five persons were left with serious injuries after the crash on Monday morning, July 12, 2021.

A cleaner who has speech and hearing impairment, whose name was only given as Mr. Koomson, was left with severe injuries to his legs and hand. 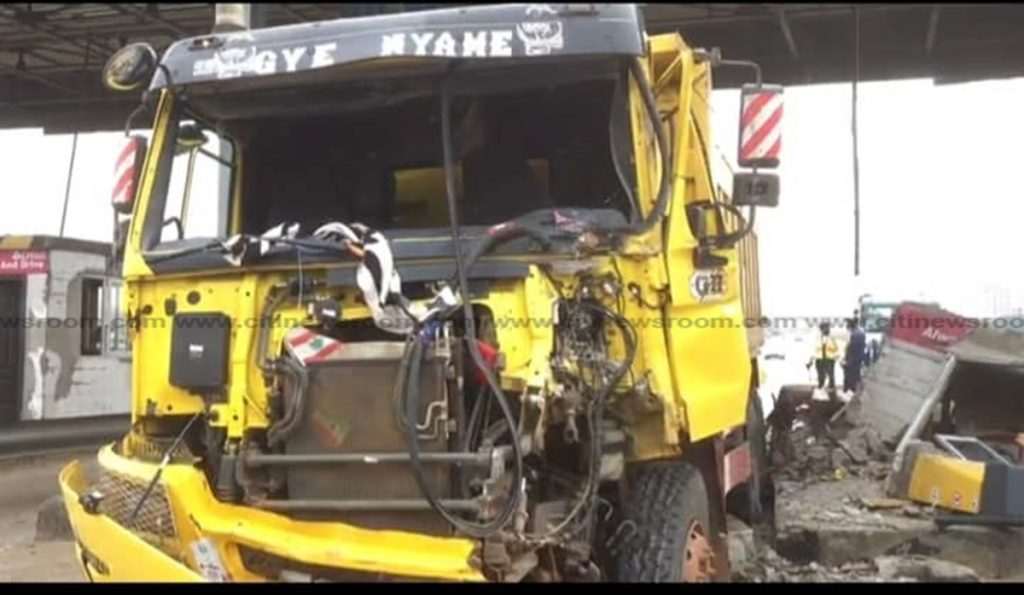 Two other victims, who were occupying a salon car that was hit by the tipper truck before it crashed into the tollbooth, were also severely injured.

The driver of the truck, who was earlier arrested by the police, is also said to have sustained some injuries alongside one tollbooth attendant who reportedly had some minor cuts on the face.

The injured persons are all being treated at the  Tema General Hospital.

A video of the crash shows the body of the cleaner lying on the ground helplessly, with many onlookers at the scene.

Tema Regional Commander of the Police Motor Traffic and Transport Department, Chief Supt. William Asante, told Citi News that information he had received is that a “vehicle had stopped to pay the toll and then the tipper-truck driver carelessly ran into the booth.”

“This is the result we are witnessing now. It is a serious accident, but not fatal. Some people have sustained varying degrees of injury and have been rushed to the Tema General Hospital”, he added.

“This morning, I received a call that my father has been involved in an accident this morning. He is deaf and dumb, and can barely do anything. So I rushed to the hospital only to see that both legs have been smashed.”

Meanwhile, the payment of toll at the Tema-bound side of the tollbooth which was suspended by the traumatized staff for about four hours has resumed.

Monday’s crash adds to the numerous accidents that have occurred already this year.

Road crashes have killed more than 1,000 people in the country from January to April 2021.

This was disclosed by Mrs. May Obiri Yeboah, the Director-General of the National Road Safety Authority (NRSA) on Thursday, May 20, 2021.

She said last year, 2,500 people died from road crashes, adding that the figure is the highest since 1991.