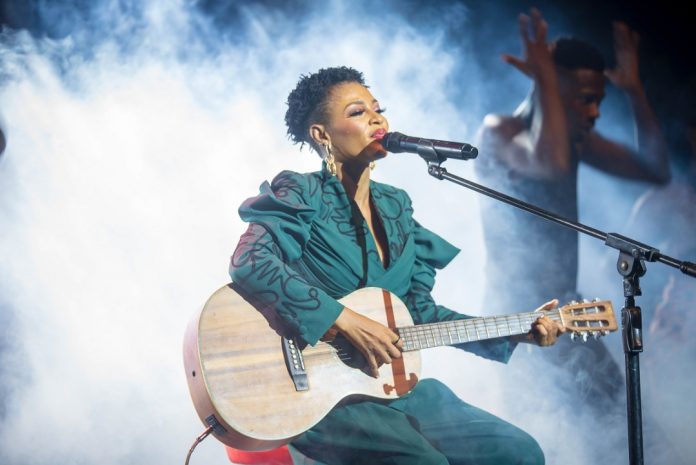 Abiana has arrived! She had a heavily attended and very successful Album Launch concert for her debut catalog “Alemle Lala”. She did not only fill the place to capacity but gave attendees an extra reason and added value for showing up for her big night.

Performing everything live from her maiden album “Alemle Lala” were 8 songs flawlessly served at +233 Jazz Bar & Grill on the night of Saturday, November 6, 2021.

Her regal entry with “Hewale” stunned the audience to their heels. As if not enough she served other songs on the album from “Amen” to “My House”, “Ebaahi” into “Baby Mo”. Well brewed songs that’d pass for professionally produced urban African sounds with a global touch. Her Ga and Ewe roots were deeply planted in her lyrics on various as well as Twi and English dialects. Her power-packed performance had everyone gleefully applauding her through each performance till she finished the set. Abiana delivered so well her 1-hour performance set felt like a 5-minutes’ energetic delivery the audience wanted more. She performed 8 songs off the 12-tracked Album released on Wednesday, November 3, 2021.

“Alemle Lala”, Ghanaian parlance in Ga, she explains means “Songs From November”, this was released in November too.  The Album is available for downloads and streams on major digital platforms across the world.

The album could be dislimbed into sub-genres like Highlife, Afrobeats, Afro-Fusion/Afropop, Soul, Hiplife/Rap/Hip-hop, Dancehall and American Pop.

Abiana performed a resounding acoustic with her guitar and it was quite scintillating. She performed with a 13-Member Band. Kuami Eugene pulled a surprise appearance on her during her performance. He also serenaded the audience to some of his hit songs after Abiana’s performance.

Kindly follow Abiana via her social media handles below.

Below are some photos from the event captured by Ace Photography (@_AcePhotograpgyGh).