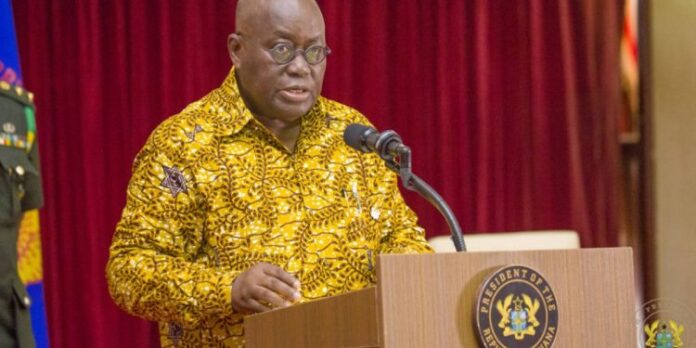 Ghana’s President, Nana Addo Dankwa Akufo-Addo, has been re-elected Chairman of the Authority of Heads of State and Government of the Economic Community of West African States (ECOWAS).

The Authority at its extraordinary session held on Wednesday, February 3, 2021, gave President Akufo-Addo the nod to serve another one-year term as Chair of the Sub Regional body.

The Authority made this known in a press statement.

“To this end, the Authority calls on His Excellency Nana Addo Dankwa Akufo-Addo, President of Republic of Ghana with the support of the Ministerial Ad hoc Committee on institutional reforms to lead a reflection on the issues and a report on this point be submitted to the ordinary session of the Authority to be held in June 2021. To that effect, a consensus emerged from the heads of state and governments that His Excellency Nana Addo Dankwa Akufo-Addo continues for a second term as Chair of the ECOWAS Authority to oversee the implementation of the reforms.”

When was Akufo-Addo first elected?

President Akufo Addo was appointed ECOWAS Chair in October 2020 at an ECOWAS meeting in Niger on September 7, 2020.

He was unanimously elected to take over the mantle of leadership from the President of Niger, His Excellency Mahamadou Issoufou, for a period of one year.

President Akufo-Addo in his acceptance speech said “Excellencies, I am fully aware of the challenges which confront West Africa. Past leaders of ECOWAS have demonstrated their collective will and determination to drive the agenda of regional integration, opening up our economic frontiers, encouraging healthy competition amongst Member States, and ensuring that we adhere to our formative principles,” he said.

The President continued, “As much as considerable progress has been made since the establishment of ECOWAS, some forty-five (45) years ago, we are all agreed that there is much more to be done to consolidate the socio-economic and political gains made over the years.”

Share
Facebook
Twitter
Pinterest
WhatsApp
Telegram
Previous articleElection 2020 Petition: We don’t need a lot of grammar to argue our case, says Oppong Nkrumah
Next articleTurkish Woman Who Murdered Her Husband After He ‘Raped and Tortured Her’ Faces Life in Prison