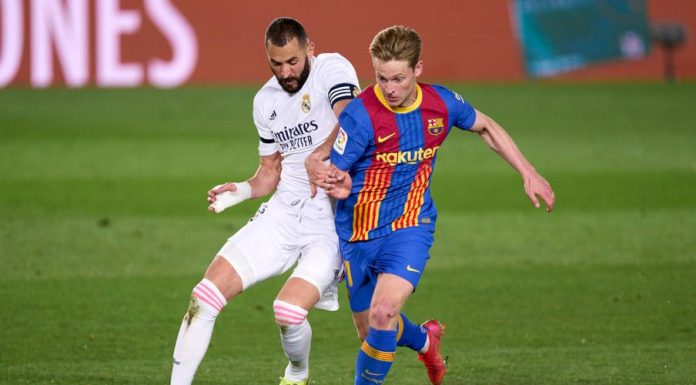 Real Madrid have won their last three games in all competitions against Barcelona and have not won four or more in a row against them since 1965 (seven, one in Copa del Rey and six in LaLiga).

Following their 1-3 win in October 2020, Real Madrid could record consecutive away wins against Barcelona for the third time in LaLiga history and for the second time at Camp Nou – three wins between 1963 and 1965.

Following their 1-0 defeat against Espanyol on MD8, Real Madrid could suffer back-to-back defeats in LaLiga for the first time since the final two MD’s of the 2018/19 season, under Zinedine Zidane.

If he wins this match, Sergio Busquets will become the Barcelona player with the most wins in ElClásico history in all competitions, surpassed only among players from both teams by Paco Gento (21) – Busquets has won 19 of his 40 appearances against Real Madrid (D8 L13).

Following his goal against Real Madrid at Camp Nou last season, Barcelona striker Ansu Fati could become only the fourth player to score in each of his first two starts in ElClásico in LaLiga in the 21st century, after Samuel Eto’o in 2005, who scored in his first three, Ruud van Nistelrooy in 2007 (two) and Pedro Rodríguez in 2010 (two).

Karim Benzema has scored 10 goals in his 36 matches for Real Madrid against Barcelona in all competitions and is one of just 13 players to reach double figures for goals in ElClásico history.

If he loses this match, Barcelona’s Ronald Koeman will become only the second manager in LaLiga history to lose his first three ElClásico matches, after Patrick O’Connell between 1935 and 1940, also with FC Barcelona.

Real Madrid coach Carlo Ancelotti has not won any of his five away managerial games against Barcelona in all competitions (D2 L3), losing on both of his visits to Camp Nou as Real Madrid manager. Only one Real Madrid coach has lost his first three away games in ElClásico history in all comps and that was Leo Beenhakker, who lost on his first four visits to the Blaugrana ground between 1987 and 1988.