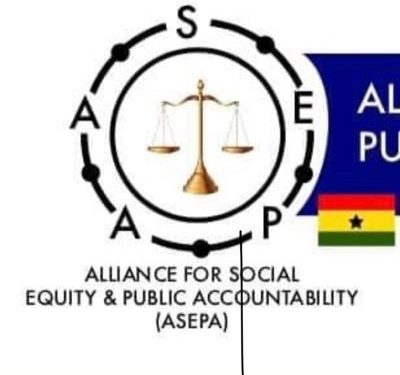 The Executive Director of the Alliance for Social Equity and Public Accountability (ASEPA), Mensah Thompson, says the Chief Justice, Kwesi Anin Yeboah’s decision to petition the Criminal Investigations Department (CID) to probe the bribery allegation made against him was a hasty one.

Mr. Thompson believes the Chief Justice should have petitioned the Commission on Human Rights and Administrative Justice (CHRAJ) instead.

He said petitioning the CID amounts to an abuse of his office.

“I am shocked why the Chief Justice has rushed to the CID in this matter when he is the head of the judiciary and understands the law more than I do, and he knows that in matters of bribery and corruption against public officers, the original jurisdiction lies with CHRAJ,” he told Umaru Sanda Amadu in an interview on Eyewitness News.

A lawyer, Akwasi Afrifa while responding to a petition filed against him at the General Legal Council alleged that a former client he was representing at the Supreme Court told him that the Chief Justice had demanded a US$5 million bribe from him to allegedly influence a court case in his favor.

But the Chief Justice in a statement on Monday, July 12, 2021, denied making such a demand.

He subsequently directed that a formal complaint be made to the Criminal Investigations Department of the Ghana Police Service for investigations and the necessary action taken in the matter.

“What is reserved for the Chief Justice is taking private legal action against the lawyer making the allegations against him but to drag the CID into this matter, for me, I think it is an abuse of office and unwarranted.”

The ASEPA boss said CHRAJ can be trusted to do a thorough job in probing the issue and its report will help in whatever next line of action is needed to be taken.

“The Chief Justice can save that energy for the response to CHRAJ because the investigations CHRAJ will be conducting will be a thorough one, and he has the right to be heard appropriately with CHRAJ and so all these long responses he has written to the CID could have been saved for CHRAJ which is the constitutional body mandated to investigate such issues in accordance with the law,” he said.

“The CID only comes in when it is found that he actually collected the bribe… The CHRAJ report will only tell us whether the allegation is true or false and then another jurisdiction will be invoked,” he added.

He said Parliament will also need to get involved by invoking their supervisory role to get to the bottom of the issue.