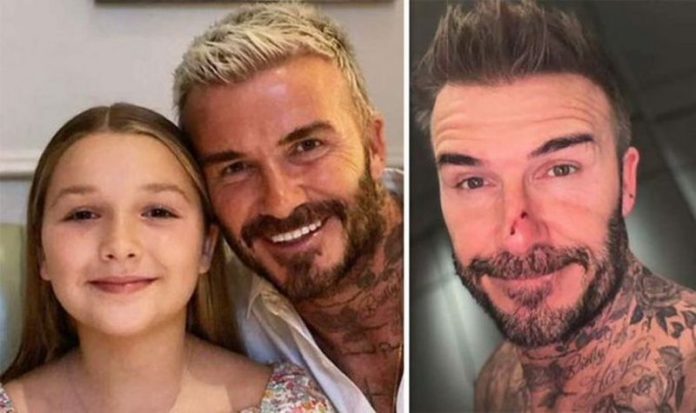 David Beckham, 46, has warned parents not to put their nose near their children’s mouths after a playful scuffle with Harper Seven, 10, left him with a bloodied nose.

In view of his 69 million Instagram followers, the bleary-eyed football ace shared a topless selfie with the gash on his nose in clear view.

Clearly unphased by his wound, he captioned the post: “Note to self, when tickling your daughter don’t put your nose near her mouth [laughing emoji].”

Many of David’s neck and chest tattoos are visible in the snap, many of which are dedicated to his family, including Harper’s name which is inscribed on his collar bone.

David and wife Victoria frequently update fans on their family via social media.

Last week, Victoria gave a glimpse into a morning in the Beckham household as David and Harper made breakfast together.

Victoria filmed the father-daughter duo standing at the hob as David taught his daughter how to perfectly boil an egg.

In the clip, David can be seen guiding his daughter as she uses tongs to drop an egg into a simmering pan of water while Victoria says: “Harper is cooking eggs with daddy.”

The proud mum also captioned the clip: “Breakfast with the Beckhams- (Good job Harper is learning from daddy and not me!).”

This isn’t the first time Harper has showed off her cooking skills, last week the 10-year-old baked cupcakes to raise money for Filozoikos Dog Rescue.

In view of her 29 million followers, Victoria shared a picture of Harper with her cakes at the bake sale with the caption: “Charity bake sale for Filozoikos Dog Rescue! Proud of you Harper!”

The fashion designer also shared a snap of the poster Harper had created with the help of the family, with the message: “Made by Harper (with a little help from the rest of the Beckham family.”

However, Victoria was left unimpressed with husband David because he kept eating the cakes they were supposed to be selling.

In a clip, David can be seen behind the cake stand just about to put a cake in his mouth, before Victoria questions what he is doing.