Electoral officials who violate EC code will be prosecuted – EC 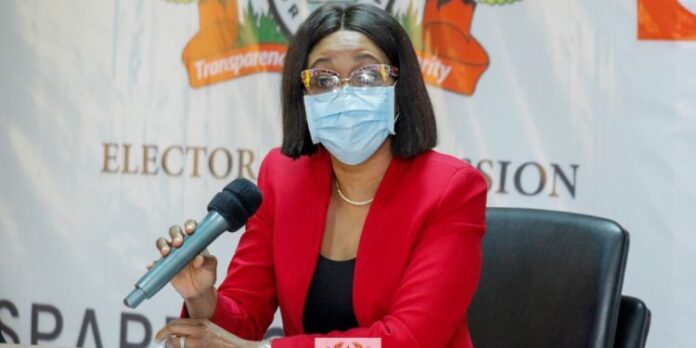 The Electoral Commission (EC) says officials who breach the instructions set out in the Election 2020 Electoral Officials Code of Conduct will be prosecuted.

The EC Code of Conduct for Electoral officials, which seeks to reflect on the core values and guide the day-to-day activities of election officials appointed by the EC, mandates officials to adhere strictly to all existing laws governing the conduct of the elections.

Mr Kwame Amoah, EC Greater Accra Regional Director, told the Ghana News Agency in an interview on Thursday that, punishment for offending officials will include a fine up to 500 penalty units or a term of imprisonment at most two years or both.

He said, “the offender shall for ten years from the date of expiration of the term of imprisonment be disqualified from being engaged as EC official. Besides the names and photographs of the offending officials shall be published in the newspapers as well as on the commission’s website”.

“Family members of offending officials would not be permitted to work for the EC in future electoral activities for ten years.”

He explained that Electoral Officials were under an obligation not to do anything by the way of actions, attitude or speech which indicate a bias or preference for any political party – candidate of political party representative or agent, in the discharge of their duties.

The Officials are expected not to be a member (active or otherwise) of any political party or any organization known for supporting any political entity.

The Officials are to demonstrate impartiality and fairness in relating to all Applicants, Voters Political Parties, Candidates and their representatives and all other stakeholders at all times.

“They are not allowed to attend any meetings of any political parties or candidates contesting the elections unless he or she has been mandated officially by the commission.

“Officials are not allowed to wear, carry, or display obvious partisan signs, logos, symbols, slogans and emblems, and paraphernalia related to a political party or candidate”.

Mr Amoah noted that the code also prohibited Electoral Officials from working for or receiving wages from a political party or candidate.

The Officials also must treat with compassion, but under established procedures, elderly persons, persons with disability and pregnant women and provide the assistance that the regulations and electoral laws prescribed.

After conducting all duties with professional courtesy and decorum, the Officials are to refrain from improper use of unauthorized release of information obtained in the course of any official duty.

He said “Electoral Officer shall not use his or her influence to disenfranchise a voter under any circumstance.

“Election official who is working shall not attend to make a Voter reveal or tell him or her about how the voter has voted or intends to vote, and put a mark on the ballot paper that can make the identity of the voter known.

“Use his or her influence to help any person to be able to vote knowing that the person is ineligible to vote, give a signal or speak to any voter or do anything within the inner perimeter of a polling station with the intension of influencing voting patterns”.