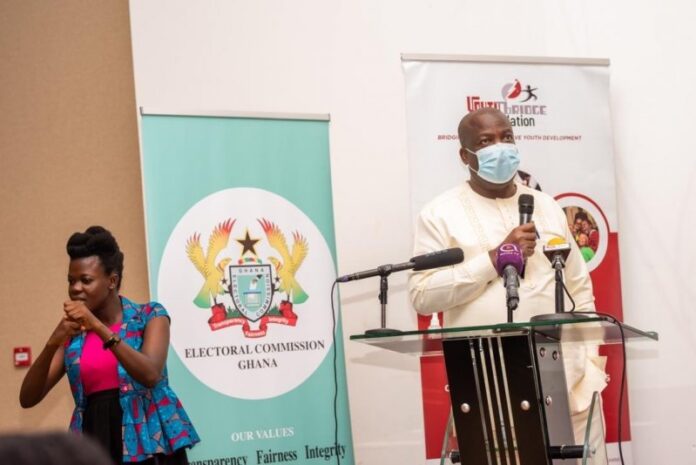 Dr Serebour Quaicoe, the Director of Electoral Services at the Electoral Commission (EC) on Tuesday said actions such as tampering with a ballot box, destroying ballot paper, defacing posters was an electoral offense.

“Engaging in electoral offenses means the fellow is hiring a room at the prison. Also snatching a ballot box at a polling station may result in a bullet snatching your life,” he said.

Dr Quaicoe, who was speaking at a day’s youth dialogue in Accra said electoral violence was one of the gravest threats to many democratizing societies.

The forum jointly organised by the EC and the Youth Bridge Foundation was on the theme; “The Electoral Offences: The Unspoken Threat to Peaceful Election.”

Dr Quaicoe explained that electoral offences under Act 1960, Act 29, or the electoral laws or regulations, such acts or omissions had been made illegal with a view to ensuring free, fair, and competitive elections.

“It is an offence in connection with an election, to attempt to vote before the poll officially opens, or after it closes. To vote or attempt to vote in the name of another person, living, dead or fictitious. To obstruct, or interfere with the work of an election officer,” he noted.

Dr Quaicoe disclosed that as part of an effort to ensure sanity during the upcoming elections, no mobile phone would be allowed at the polling station.

“Anyone who goes to the polling station with a mobile phone will have to leave it with the Presiding Officer for safekeeping and picking after voting,” he said.

He said the country’s democratic system of government, the ultimate and sovereign political power resides in the hands of the people and the youth constitute a majority of the population in most cases.

He said the strength of every country was her youth, who are a major source of human capital and key agents for socio-cultural, economic, and political development as well as technological innovation worldwide.

Dr Quaicoe said the youth were critical in getting a leader into power; be it through votes, irregularities, or electoral violence.

He said the youths had been the pivot of activities in the run-up to all general elections and that some youth in the past had played very positive roles while others have played negative roles.

Dr Quaicoe advised the youth to guard against negative manipulations and must know that politicians were not trustworthy.

He said it was the responsibility of the young generation to enhance the political, social, economic, and psychological development of Ghana and its people.

“You should all note that no politician’s ambitions are worth sacrificing your life or years of your life in a prison. Be peacebuilders in your political parties and communities,” he noted.

Madam Abigail Nutakor, Head of Gender, Youth and Disability Unite at the EC said the youth were the future and must not be used as pawns by politicians and other people to incite violence during the upcoming elections.

“Let your words and actions build and unite, not destroy and divide. Do not be lured to engage in electoral offenses such as snatching ballot boxes and double voting defacing of posters,” she said.

Mr Seth Oteng, Executive Director, Youth Bridge Foundation, said Ghana had earned a good reputation in holding peaceful elections over the years and the youth had a role to play in sustaining the democratic credentials.

He advised the youth especially first-time voters to protect their future by shunning electoral violence.

“Avoid anything that will disturb the peace of this country since peace is a major factor that determines a country’s economic growth,” he said.