Government Is Not Seeking To Lay Blame On Amidu – Oppong Nkrumah 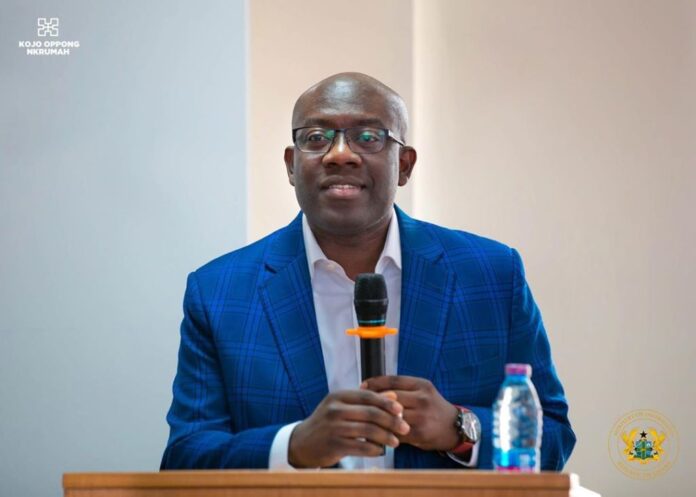 Information Minister, Kojo Oppong Nkrumah says government is not seeking to blame the former Special Prosecutor, Martin Amidu by responding to the resignation letter of the former public servant.

Mr Oppong Nkrumah in an interview on Joy FM’s Super Morning Show Wednesday said the nine-page reply by the Office of the President was necessitated to set the record straight and ensure that all the truths are in the public domain.

According to him, Mr Amidu is highly respected by government that is why President Akufo-Addo appointed him to check corruption in the country.

The Ofoase Ayeribi MP said it will, therefore, be inappropriate for the same government to falsely accuse him.

“It is important to state clearly that we have not sought to lay blame at the door step of Mr Amidu, we have not done that,” he stressed.

“Mr Amidu, even before communicating his letter of resignation to the President had put a document in the public domain that seeks to create an impression that; firstly, he was denied support for his office to function and secondly his Office was interfered with.

Martin Amidu on Monday tendered in a letter to resign from his post as Special Prosecutor following his appointment in 2018.

According to Mr Amidu, President Akufo-Addo was attempting to make him a “poodle” of his government and since he [Amidu] is an honourable man and a person of integrity he will refuse to let himself be compromised by partisan influence.

The President after 24 hours of receiving the letter accepted the resignation of Mr Amidu, popularly known as Citizen Vigilante, and subsequently issued a detailed reply to the concerns he raised.

In the nine-page reply, the Presidency categorically denied all the allegations the Special Prosecutor raised to explain why he wants to resign.

According to the Presidency, government did not interfere with Mr Amidu’s work, neither did it refuse to provide the necessary logistics for the Office of the Special Prosecutor to operate.

The Office of the President revealed it was rather Mr Amidu who rejected government’s accommodations, funds, and other equipment for the smooth running of the Office.

Following government’s response, some people are of the view that the Office of the President only wants to shift the blame on Mr Amidu for the failure of the Special Prosecutor’s Office to undertake its mandate.

However, the Information Minister disagrees, noting that, “for the purposes of public record, it is important to state the facts as they are and thereafter the public can make their judgment.”