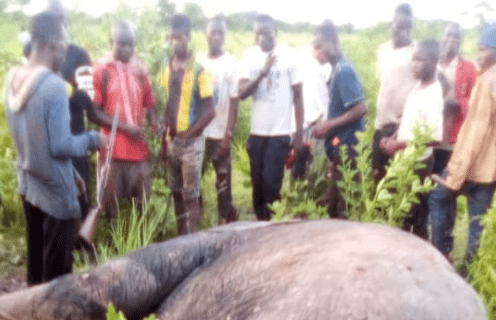 Three elephants that invaded the Yankazia community in the East Mamprusi Municipality of the North East Region have killed one person in the area.

The elephants were also said to have invaded three other communities, Soanvusi, Nasuan and Tuna.

According to a National Disaster Management Organisation report, the elephants were moving across the street when two persons on a motorbike run into them, and the mammals attacked and killed one person.

The other person managed to escape. The body of the deceased farmer was completely mutilated.

The body of the deceased has been conveyed to Gbentiri for burial. He had three wives, eight boys and five girls.

The elephants reportedly moved further to the Kariga District, but have since returned to the East Mamprusi Municipality.

A report of the incident was made to the Gbintiri police by the Assemblymember of the Gbintiri Electoral area, and one Beladat Mbiane, and an investigation has commenced.

Police personnel from the Gambaga District have been dispatched to Gbintiri to investigate the case, and they are currently making arrangements to convey a medical officer from the Baptist Medical center in Nalerigu to the scene to assist the police investigation.

But residents claimed the elephants killed three persons as the warriors mobilized to defend themselves. One elephant has also been confirmed dead, while two are reportedly injured after a shoot-out.

NADMO in the North East Region said its officers are currently at Yankazia and moving towards the Yunyoo Nasuan district, where the elephants reportedly came from.

The organization noted that several people were seen following the three elephants.

This is not the first time elephants have attacked some residents up north.

In May, an elephant was killed at Yama near Wungu in the West Mamprusi Municipality, with its ivory stolen.