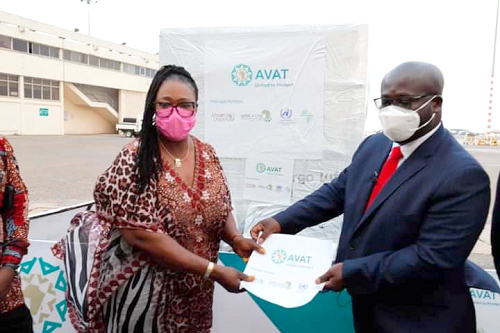 The government has taken delivery of 177,600 doses of the single-shot Johnson and Johnson COVID-19 vaccine.

That brings to 1,515,450 the total number of doses of the COVID-19 vaccine the country has received.

Procurement of the Johnson and Johnson vaccine was done under the African Vaccine Acquisition Trust (AVAT), a purchasing facility instituted by the African Union (AU) to boost the continent’s access to COVID-19 vaccines on the global market.

The vaccine comes at a time the country is experiencing a surge in cases of COVID-19.

Receiving the vaccine on behalf of the government at the Kotoka International Airport last Saturday, a Deputy Minister of Health, Ms. Tina Mensah, said the consignment was the first in a series to be received this month.

She said on March 28, 2021, AVAT signed a 220-million dose purchase agreement with Johnson and Johnson, with the potential to order an additional 180 million doses.

Out of the 220 million doses, 6.4 million will be received by AVAT in August 2021 for distribution to member countries, including Ghana.

Ms. Mensah said the AVAT chose Johnson and Johnson for the initial pooled purchase because it was a single-shot vaccine, cheaper and easier to administer and had a long shelf life and favorable storage conditions.

“In addition to the above, the vaccine is partly manufactured on the African continent, with fill-finish activities taking place in South Africa,” she added.

Ms. Mensah said it was in anticipation of the vaccine that the government procured over 3,000 huge vaccine freezers, cold boxes, among other facilities, with the capacity to meet almost all kinds of vaccine storage requirements.

She assured the public that the ministry would continue to deliver its mandate in due diligence to ensure a healthy population for national development.

Under the deployment plan, the government, in  February 2021, received the initial 600,000 doses of COVISHILED AstraZeneca under the COVAX facility.

In March, 366,850 doses of the COVISHILED AstraZeneca came in. Some of them were donated by the Indian government and the AU Commission, while the rest were purchased by the government.

In May, 350,000 doses of COVISHILED AstraZeneca were received from the Democratic Republic of Congo under the COVAX facility.

In March, the country received some doses of Russia’s Sputnik vaccine as a donation from the United Arab Emirates.

President Akufo-Addo, in his 20th update on the national response to COVID-19, gave an assurance that the government would ensure that COVID-19 vaccines to be deployed in the country were effective and safe.

He said the target was to vaccinate “the entire population, with an initial target of 20 million people”.

The World Bank has estimated that Ghana will need a minimum of $180 million to procure vaccines that can cover 60 percent of its population.