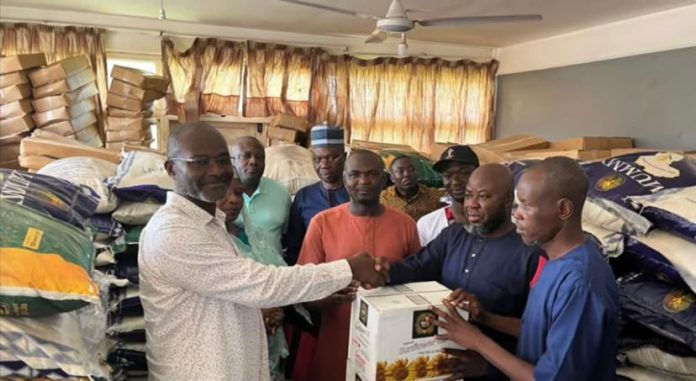 The Member of Parliament(M.P.) for Assin Central, Hon. Kennedy Ohene Agyapong, has made a donation to persons living in areas of Bawku affected by recent conflict that has led to the death of some people in the area.

The presentation of the items donated which included five-hundred(500) bags of 50kg and fifty(50) boxes of cooking oil, was made at Bolgatanga which happens to be the regional capital, although the area at centre of the controversy is Bawku. Hon. Agyapong, who doubles as the Chairman of the Interior and Defence Committee of Parliament revealed that, he wanted to visit Bawku, the conflict area to acquaint himself with the situation there but was advised not to do so for security reasons.

According to Mr. Agyapong, he received a request from the New Patriotic Party(NPP) Chairman of Bawku to come to the aid of the people as the as the conflict situation started by the Mamprusi and the Kusaasi factions, has put the people in a state of wilderness. The briefings gathered put it that, the killing of two men and a woman in the area by unknown assailants has put fear and panic in the people to the extent that, those at home can not go out while the outsiders can not also enter. This according to reports, was impeding economic activities in the area.

Hon. Agyapong told the leaders not to sideline any of the two tribes, that is Mamprusis or Kusaasis in sharing the items but ensure equitable allocation to all of them. The Chairman suggested that, there are other tribes in the Bawku area who are not either Mamprusi or Kusaasi and that if possible, those people should be considered in the distribution of the items.
Hon. Agyapong agreed that, if that can also help in the peace building process, it should be done.

The legislator said that, without peace, there can not be development in the country. He entreated the leaders to resolve to ensure that, the various tribes in the area live in peace and harmony.