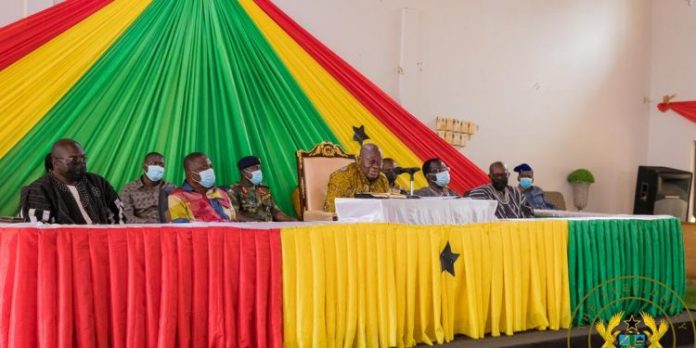 The President, Nana Addo Dankwa Akufo-Addo, is disappointed that the New Patriotic Party lost some of its parliamentary seats during the 2020 general elections in the Bono East Region.

The NPP failed to win majority parliamentary seats in the region, which was created in the first term of Akufo-Addo’s Presidency.

The party had five seats going into the polls with the NDC having four, but after the elections, the NDC was able to snatch two more seats from the NPP.

Addressing a durbar of chiefs and elders in the Bono East Region at the beginning of his two-day tour on Sunday, August 8, 2021, President Akufo-Addo said the NPP will bounce back in 2024.

According to him, the party will work hard to regain what rightfully belongs to it.

“I am not happy with the Bono East Region in the 2020 polls at all. The NPP had five seats going into the elections but had only three after the elections, and the NDC has six. What can I say? Nothing, but all we have to do is to work hard during the 2024 elections to win more of the seats,” he said.

The Krontihene of the Mo Traditional Area, Nana Adjei Adinkra II, at the same event commended the President for the existing social intervention programs in the country.

“We, the Chiefs and people of Kintampo, remain indebted to you for the good works that you have done in our Municipality, through your good policies, programs and projects in the various sectors of the economy, all aimed at improving the lives of our people. Your flagship policies easily come to mind.”

According to the Krontihene, the flagship policies have had a tremendous impact on the lives and livelihoods of the people of Kintampa.

He mentioned the Planting for Food and Jobs, which, he explained, has “made fertilizers and seeds available to our farmers, leading to increase in yields.”