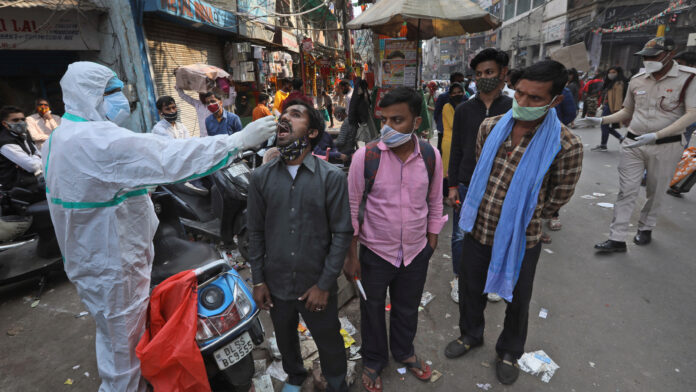 According to the health ministry update, in addition to exceeding nine million confirmed cases, some 584 deaths were registered in the last 24 hours, taking the total to 132,162.

India is currently witnessing a steady decline in cases from its peak in September, with the country reporting fewer than 50,000 daily new infections during the last 13 days.

The capital New Delhi is, however, witnessing an enormous increase in new cases.

Officials in New Delhi on Thursday quadrupled the fines to 2,000 rupees ($27) for people not wearing face masks, as the government came under an increased pressure to impose another lockdown.

“At times when words alone don’t do the trick, we have to get a bit tougher,” chief minister Arvind Kejriwal told a news conference, also tweeting that the city of 20 million was on a “war footing”.

The federal government has also constituted a high-level team to control COVID-19 in Haryana, Gujarat, Manipur and Rajasthan states.

India imposed one of the world’s strictest lockdowns in March, but the restrictions dealt a severe blow to the economy and the government has since eased them.

Few people wear masks – particularly outside large cities – and in recent weeks shoppers have thronged markets in preparations for a series of religious festivals.

Though new cases in India have dipped to less than half in recent weeks from a peak of 100,000 infections a day in September, authorities fear a surge in coming weeks.

The western city of Ahmadabad late on Thursday announced an indefinite night curfew after reporting an uptick in cases following the Diwali festival weekend. The major city in Gujarat state has recorded approximately 47,000 cases and close to 2,000 deaths.

In Delhi, almost 500,000 people have been fined since June for not wearing masks, 370,000 for ignoring social distancing rules and 3,500 for spitting.

This week the number of cases in the metropolis passed half a million, with a record rise in daily cases and deaths.

More than 90 percent of Delhi intensive case beds with ventilators were occupied as on Thursday, a government mobile app showed.

The problem has been exacerbated by a choking haze and pollution that grips the city this time each year.

“My father’s oxygen saturation level dipped … and we rushed to the nearby hospital but there were no beds available,” Delhi resident Rajeev Nigam told AFP.

“We ran all night from one hospital to another but it was the same story everywhere,” he said, attacking the “unprepared” city government which is working to increase the number of hospital beds.

Kejriwal this week announced that the number of guests at weddings would be cut to 50 and asked the central government for authority to close down markets if they become virus “hotspots”.