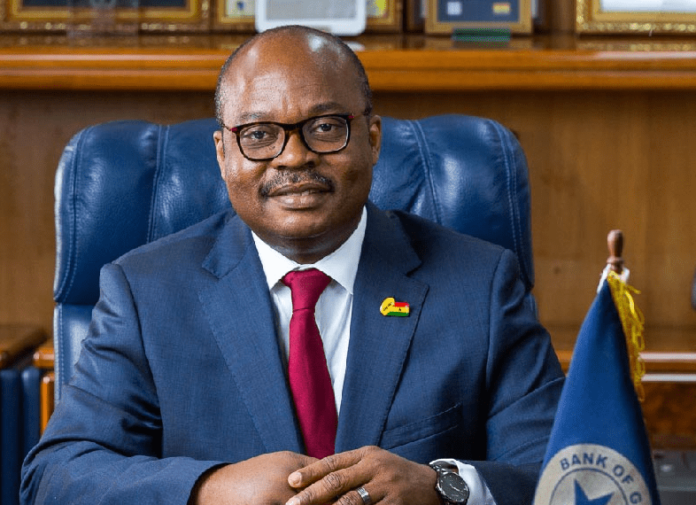 The Monetary Policy Committee (MPC) of the Bank of Ghana (BoG) has noted that macroeconomic conditions have generally improved relative to conditions at the time of the last MPC meeting in September 2020.

Governor of the Bank of Ghana (BoG) Dr Ernest Addison said at the MPC press conference on Monday November 23 that global conditions continue to be supportive, domestic inflation is easing, growth prospects are improving, crude oil prices have stabilized, monetary aggregates have expanded but with minimal impact on inflation, the current account deficit is stable, remittances inflow has remained firm, the exchange rate has been stable and reserve buffers continue to remain strong.

The key risks, he said are the evolution of the budget deficit and the financing needs to support budget implementation and the uncertainty surrounding the pandemic.

To that end, he said “Under the circumstances, the Committee’s decided to maintain the policy rate at 14.5 percent.”

Mr Laporte further stated that this will further put Ghana on the international market with a positive perception.

“When you have macro-economic stability, you don’t only protect yourself, in terms of overspending, it also allows in maintaining debt loan, putting Ghana on the international market with a positive perception,” he said.

“They will say this is a country with good macro stability, the economy is managed well, inflation is coming down and deficits are under control, unemployment is fairly low, domestic mobilization is strong,” he told Joy News.

The Finance Minister had said the government would continue with its efforts to ensure that the benefits of macroeconomic stability is translated into the well-being of all Ghanaians.

He said such benefits would be felt in the provision of safe drinking water, good roads, jobs, access to good healthcare, stable and affordable electricity and good education.

“The many social interventions that have been implemented by government over the last three years along with jobs created, have brought relief to many Ghanaians,” he said.

“We paid the registration fees for thousands of BECE candidates, abolished fees for post graduate medical training, restored teacher and nursing trainee allowances, doubled the capitation grant, and implemented NABCO which has employed 100,000 graduates across every constituency in Ghana.”

He said government has also recruited over 350,000 people in the public sector in the last three years and these can be found in various fields including teaching, security services, nursing, Nations Builders Corps (NABCO) and the forestry sector.

“We have expanded the Livelihood Empowerment Against Poverty (LEAP) programme by 150,000 people, expanded the school feeding programme by 500,000 children and increased the peace keeping allowance from $31 to $35 per day.

“Thousands of Persons With Disability (PWD) have had their allocation from the District Assemblies Common Fund (DACF) increased by 50 percent, [and we have] ensured the implementation of our pledge of employing 50 percent of the persons who manage the country’s toll booths from amongst Persons with Disabilities,” he said in the 2019 budget statement.