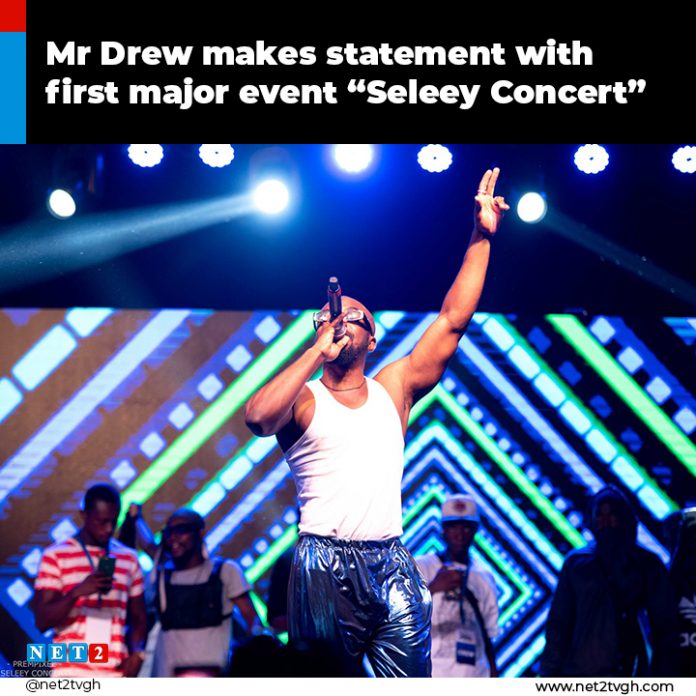 The star-studded event was an appreciation to the community that saw him growth into the talent he has become. Hosted at Mallam Kokroko Station, the concert witnessed a blend of great performances from both established and up-and-coming musicians, including Medikal, Kelyvnboy, Fameye, Kidi, Sista Afia, Guru, Ras Kuuku, Quamina MP, Wendy Shay, Camidoh, Sefa, D-Black, Dope Nation among many others.

Mr. Drew’s performance celebrated all that makes the Ghanaian singer-songwriter who he is: His heritage, undeniable swag, dance and his showmanship. He delivered a medley performance of his newer tracks “Good Vibes”, “Shuperu”, “Zombie”, “Somebody’s Bae”, “Seke” from his debut album “Alpha” and other commercial hits such as “Mood”, “This Year”, “Later”.

Mr Drew is a young budding Ghanaian Highlife , Afrobeat and Soul musician / Dancer who placed first runner-up at Mtn Hitmaker 6 in 2017. He started off his career as a dancer and then later persued music at the tertiary level. Since his debut in 2018 , he has had multiple hit songs ,from his breakthrough song with Label Mate Krymi which features BET award winning artiste, Sarkodie title “Dw3” to his current hit Song “Mood” .

Mr Drew won “BreakThrough Act of Year” at the 3Music Awards 2021 and also “Best New Artist of The Year” at Ghana’s Vodafone Music Awards 2021. Mr. Drew is currently signed to Highly Spiritual Music label . He is simply a representation of African music and dance.