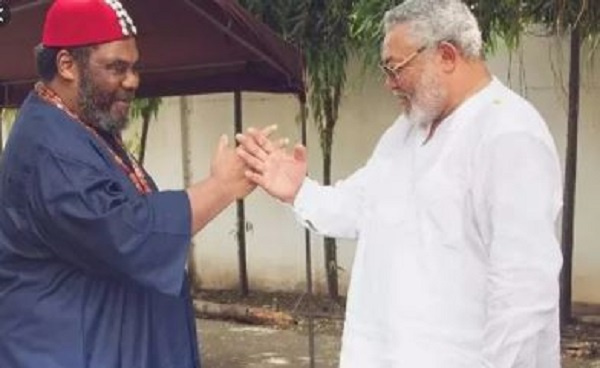 Describing the late JJ Rawlings as his ‘dear friend’, the Nigerian actor on Thursday, November 12, 2020, took to social media to eulogize the former president.

He described the late Rawlings as a man whose legacy will forever remain a part of African history.

To him, Rawlings’ legacy is unmatched.

“Rest in Peace & Power, my dear friend Jerry Rawlings. Your legacy is forever part of African history,” he wrote on social media.

Notwithstanding, the Nigerian filmmaker had a cordial relationship with Mr. Rawlings while he was alive.

Pete Edochie, who according to many, bears a resemblance to the late former President, also shared a strong connection with him.

The veteran actor said prior to his first meeting with Mr. Rawlings, countless Ghanaians had approached him saying, he reminds them of their former president to the extent that his own daughters joined in the fray.

“I agree with people who say we have the resemblance because I know how I look and seeing him here I have no doubt they are right. It appears we have a lot in common”.

The Nollywood Star once stated during a Press Conference held in Ghana for Kofas Media’s ‘Corruption’ movie.