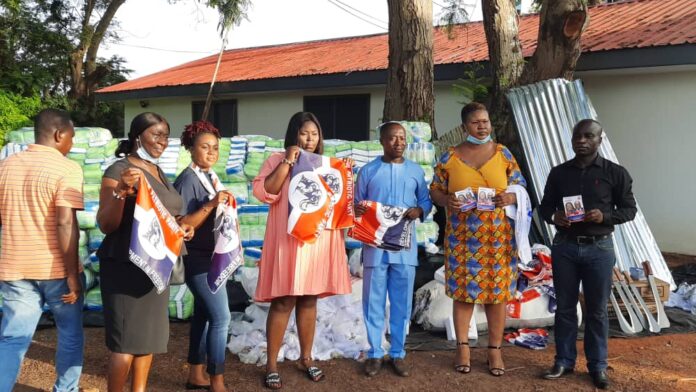 The Duisburg(Germany) chairperson of the New Patriotic Party,Madam Mary Ahenkan has donated items worth millions of cedis to support some constituencies within the New Patriotic party in quest to support the 2020 campaign and the vision to retain president akuffo Addo.

The items includes about 5000 packs of sanitary pads meant for the national women’s wing of the party, over 5000 pieces of t-shirts for various constituencies, roofing sheets,and other valuable items are parts of activities by Madam Ahenkan(Kumasi market) to help facilitate the activities of the party as it approaches the December general elections.

Madam Ahenkan, popularly known as kumasi market Germany,who is the chairperson for the NPP’s branch in Duisburg Germany made the donation at a short ceremony held at the party’s office!Annex) in Accra amidst party leadership and sympathisers.

According to Madam Mary Ahenkan, the presentation was aimed at resourcing, retooling and empowering the campaign team to reach out to voters in the hinterlands across the constituency.

She disclosed that the donation comes as one of the many interventions she is undertaking to strengthen the base of the party in the various constituencies towards a smooth running of the campaign ahead of the general elections.

It was her hope that the support will go a long way to aid the campaign team to deliver a landslide victory for H.E President Nana Akuffo-Addo and also secure more parliamentary seats for the NPP to help in the smooth administration of the NPP.

Madam Ahenkan tasked the leadership of the party to manage the logistics effectively in order to achieve the intended purpose of delivering the “Four More For Nana To Do More Agenda” and snatching more seats from the NDC.

She pledged her full support towards the campaign, adding that, she is ever ready to avail herself anytime duty calls.

Se said the donations were timely, since it will help the party achieve its target percentage votes in the upcoming elections.

Professor Angela Lamensdorf Ofori-Atta pledged that the party was going to put the logistics into good use, assuring the Duisburg Germany branch of the NPP a landslide victory for the president and most parliamentary candidates of the party.