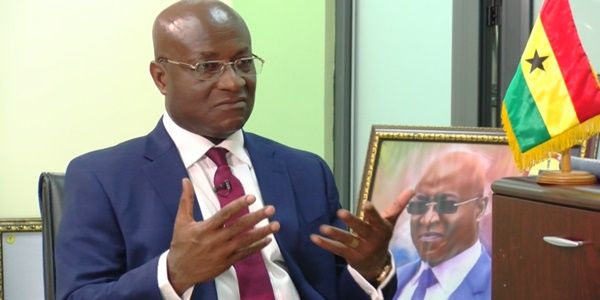 Majority Leader and Minister for Parliamentary Affairs, Hon Osei Kyei-Mensah-Bonsu has disclosed that he has the capacity to partner Vice President Dr. Mahamudu Bawumia should he win his flagbearership contest.

According to him, having served in parliament and taken up major roles in his time as a parliamentarian, he posses the qualities and working skills to help in the administration of the country.

Speaking on Okay FM’s ‘Ade Akye Abia’ programme, he explained that he is however not the only person in the party with such qualities.

“There are a lot like me in the party who can equally take up the charge should they be appointed as running mate to the Vice President in case he is elected,” he said.

“I believe that it is still too early to even think of considering to be running mate to Dr. Bawumia”.

He said anybody who wins the flagbearership slot has their own strategy to lead the party and so think we should leave it to the aspirants to decide who ever they deem fit to partner them into election 2024.

“But I can tell you that I’m more than qualified to be a running mate for any candidate who deems it fit to select me, but like I said let’s leave that for Bawumia in case he is elected to lead the party,” he added.

The Regional elections of the ruling New Patriotic Party (NPP) over the weekend have taken a new twist with supporters of the Bawumia and Alan factions in the party assessing their favorite candidates’ performance to win the flagbearer position based on the outcome of the Regional elections.

The elections have been tilted in favor of either faction as from the Trade Minister, Alan Kyerematen’s camp, his supporters claim he amassed 10 Regions namely; Eastern, Oti, Volta, Upper West, Upper East, Bono, Greater Accra, North East, Western and Ahafo Regions, and are optimistic he will be elected as the party’s 2024 Presidential candidate.

On the flip side, Vice President Mahamudu Bawumia’s camp rather believe their candidate swept more regions than the Trade Minister.

The Regional elections is described as a forecast of the upcoming contest between Dr. Bawumia and Alan Kyerematen.

Addressing the issue on Peace FM’s “Kokrokoo” programme, the Managing Director of the State Transport Corporation(STC) and a former Communications Director of the governing New Patriotic Party, Nana Akomea has asked the party to consider Dr. Bawumia and Alan Kyerematen on the same ticket.

He called on the two factions to agree and push the two leaders to run as Presidential candidate and Running Mate.