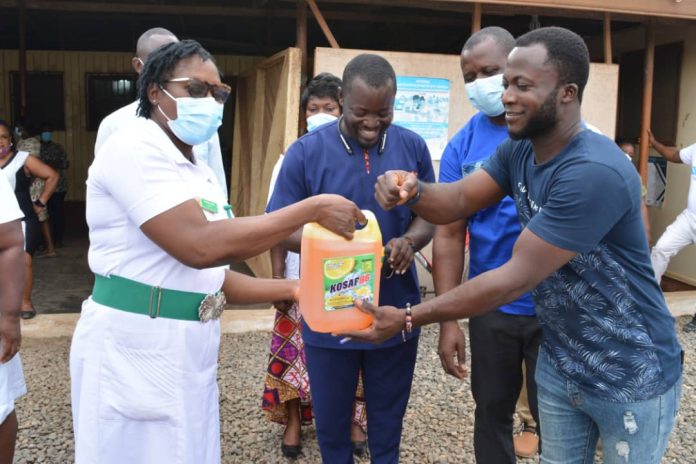 PRESENTATION OF ITEMS ON BEHALF OF HON. KENNEDY AGYAPONG ON THE OCCASION OF HIS 61ST BIRTHDAY TODAY, 16TH JUNE, 2021 TO THE MADINA POLYCLINIC AND SELECTED ORPHANAGES ACROSS THE COUNTRY. IN SERVICE TO GOD, COUNTRY AND HUMANITY

Kofi Safo presenting the items on behalf of Kennedy Agyapong to mark his 61st birthday, the Member of Parliament for Assin Central, Kennedy Agyapong made donations to a health facility and two orphanage homes in Accra.

The beneficiaries of the June 16 donations were the Madina Poly Clinic, the Adenta Frafraha Orphanage and the Potters Orphanage Village at Dodowa.

The donation also included packs of diapers and cloth to all babies born on June 16 at the Pentecost Hospital and Madina Poly Clinic.

Making the donation on behalf of the MP, Ohene Kofi Safo who is a nephew to the MP commended the staff of the respective institutions for their hardwork and sacrifices.

He revealed that Kennedy Agyapong held dearly the welfare of children and will continue to assist them.

At the orphanages, the children prayed for the MP, wished him long life and expressed their gratitude for the gesture.

In a development related to the celebration of the birthday, a lecture dubbed “The Youth with Honorable Kennedy Agyapong” will be held on June 22 in his honor.

Kennedy Agyapong is expected to address attendees and to share his life experience at the University of Professional Studies, Accra.

Other guests lined up for the forum include Fatimatu Abubakar, the deputy minister of Information, Bryan Acheampong, the member of parliament for Abetifi South, Edward Boateng, former Ghana Ambassador to China and Professor Abednego Amartey, the Vice Chancellor of UPSA.