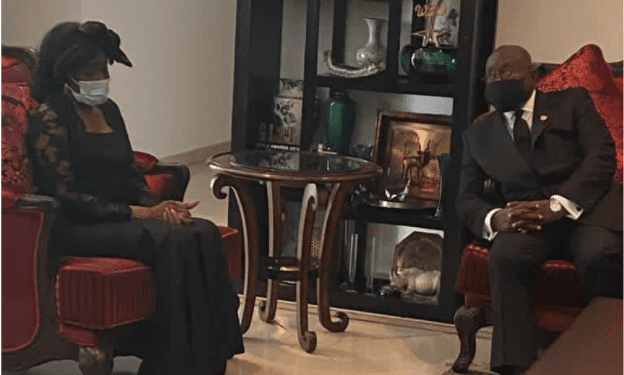 President Nana Addo Dankwa Akufo-Addo has called on Nana Konadu Agyeman-Rawlings, widow of late former president Jerry John Rawlings, commiserate with her and family on the demise of her husband.

He was accompanied by Vice President Mahamudu Bawumia and his wife Samira, the Chief of Staff, Madam Akosua Frema Osei Opare, Chairman of the New Patriotic Party Freddie Blay and some senior officials of government.

Mr Rawlings died at 1010 hours on Thursday November 12, 2020 at the Korle Bu Teaching Hospital where he was receiving treatment. He was 73.

“The entire nation was shocked by the news of that our first president of the Fourth republic had gone to meet his maker,” a sombre President Akufo-Addo told Nana Konadu at the Rawlings’ Ridge residence in Accra.

He said his sudden death is the part that is so difficult to assimilate.” It just came out of the blue that he’s left us”

“I find it so difficult to believe that the man I knew, very dynamic, energetic and vital human being is today a corpse. But then it’s an experience that would come to each one of us in our term in the Almighty’s own choosing”.

President Akufo-Addo told Nana Konadu that “You have to know that this time you are definitely not alone.

There are lots and lots of people in Ghana who are sharing your grief with you.

The President noted that with the position Mr Rawlings occupied and his contribution to the country’s development, “his departure has to be the responsibility of the Ghanaian nation”.

He said though a lot would be written about him, his passage and his contribution to the nation would not be forgotten, and indicated that “whatever arrangement that have to be made for his burial are to be that of the government of Ghana.”

“We have to make sure that this man is given a befitting State burial. His contribution to our country is enourmous in many many grounds and our nation must show its appreciation of his work,” he emphasized.

The President informed Mrs Rawlings that the Chief of Staff would liaise with the family on the way forward on his burial.

Zenator Rawlings, the eldest of the Rawlings’ four children who spoke on her mother’s and the family’s behalf, thanked the President for the show of support for the family and the immense honour done the former president in ensuring that he would be given a state burial.

She also expressed appreciation to government for the courtesies and protocols extended to the family to ensure that former President Rawlings’ memory was honoured.

“Indeed, this wasn’t expected,” she noted, and informed President Akufo-Addo that the family was yet to discuss the date of the funeral, but would work closely with the Chief of Staff and the State Protocol to ensure that “the wishes of both the family and the State are honoured as much as possible” to honour the memory of the late president.