Rawlings’ death came as a thunderbolt to me – Kufuor 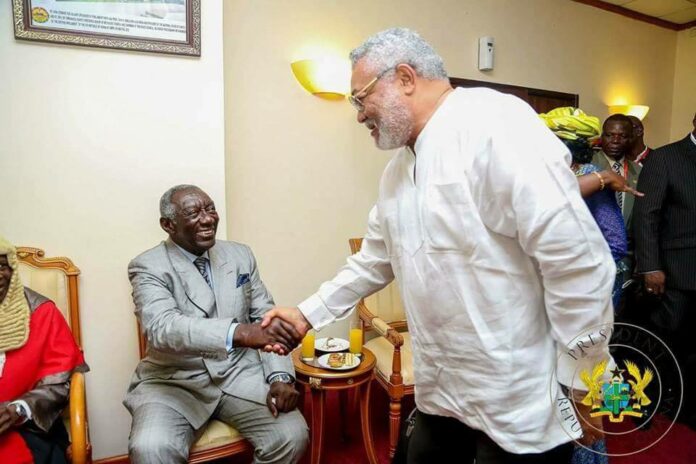 Former President John Agyekum-Kufuor has said history would give the late President Jerry John Rawlings a balanced place in the records of Ghana.

A statement issued by the former President on Friday, 13 November 2020, said: “My wife, Theresa, and I are deeply saddened by the passing of former President Jerry John Rawlings, whose untimely death reported yesterday came as a thunderbolt to us and our children.”

He noted that: “President Rawlings was the longest-serving head of state since our nation’s independence in 1957. When the time came for him to step down as President on 7 January 2001, he obliged and obviously tried to contain whatever reservations about me and my government that succeeded him and his government, within the bounds of the national constitution of 1992.

“In this regard, whatever doubts persisted about his commitment to democratic rule, became attenuated and earned him a legacy of contributing to the sustenance of democratic governance of our country till his demise.”

The statement continued: “History would give him a balanced place in the annals of our nation.

“We’re left now to mourn him and also express our heartfelt condolences to his widow Mrs. Nana Konadu Agemang-Rawlings, their children, and the larger family.”

Meanwhile, President Nana Addo Dankwa Akufo-Addo has directed that all national flags fly at half-mast for the next seven days in all parts of the country, following the demise of former President Jerry John Rawlings.

Mr. Akufo-Addo has also declared seven days of national mourning from Friday, 13 November to Frida20 November in honour of the memory of Mr. Rawlings.

The “government will work closely with the family of President Rawlings on the arrangement for a fitting state funeral for the late president and will keep the nation informed accordingly”, Nana Akufo-Addo said in a statement.