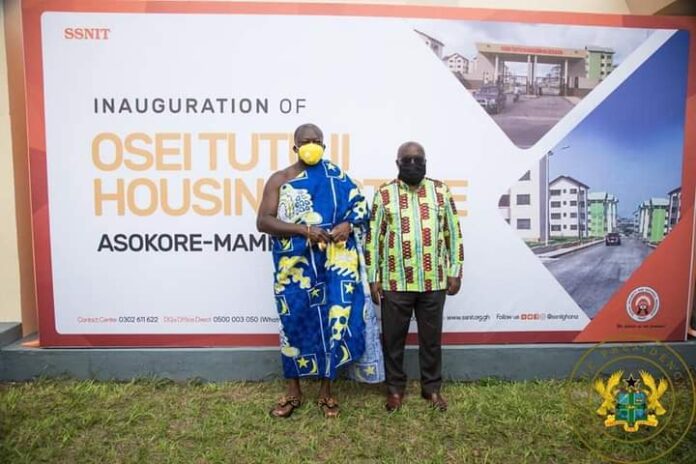 The Asokore-Mampong Housing Unit, now referred to as Osei Tutu II Housing Estates, is part of six (6) housing projects started by the Kufuor administration in 2005, with the others situated at Borteyman, Kpone, Koforidua, Tamale, and Wa.

It will be recalled that the Affordable Housing Project was started with the objective of providing accommodation for low to middle income workers, and also to build the capacity of local contractors among others.

However, upon the assumption of office of the Mills/Mahama administration in 2009, the project stalled. In 2017, the new Board of Trustees of SSNIT, under the Chairmanship of Dr. Kwame Addo Kufuor, took steps to fast-track the completion of the then abandoned project, in line with the President’s commitment to provide affordable housing for Ghanaians.

The Board subsequently approved a total amount of GH¢256,972,988.04 for SSNIT to complete the project within two years.

The Asokore Mampong is made up of 1,053 units (91 blocks), comprising 26 shops, 336 one-bedrooms, 691 two-bedrooms, and all the blocks have been named using Adinkra symbols to reflect the culture and traditions of the Asante Kingdom.

Describing the day as “a very good day for me”, President Akufo-Addo told the gathering that “two important projects (Boankra Inland Port and the Asokore Mampong Affordable Housing Units) initiated by my boss, former President Kufuor, have been brought to completion for me.”

He lamented the fact that, after the exit of the NPP from office in 2009, the projects were abandoned by the Mahama government, however “God being so good, he has made it possible for us to complete it.”

The President applauded the decision to name the Asokore-Mampong Hosuing Unit after Otumfuo Osei Tutu II, describing it as “an excellent decision”.