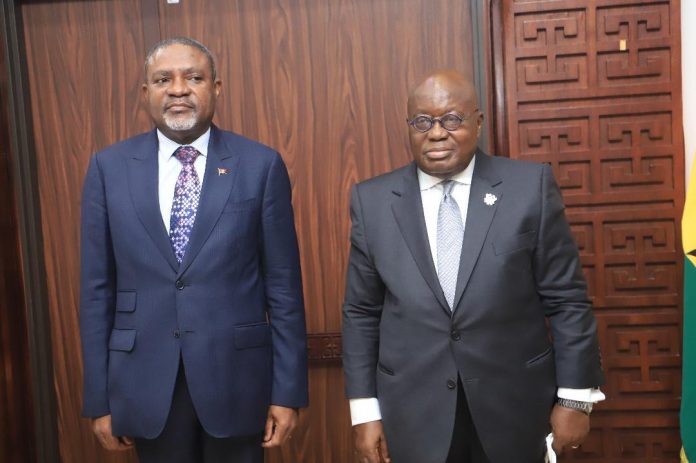 President Nana Addo Dankwa Akufo-Addo Thursday wished farewell messages to two envoys whose duty tour of Ghana has ended.
The pair are; Ambassador Augustus Da Silva Cunha of Angola, and Ambassador Ron Strickker of The Netherlands.
At separate events at the Jubilee House Accra, President Akufo-Addo commended both envoys for their sterling performance during their duty tour of Ghana.
He said relations between their respective countries and Ghana had grown stronger during their tenure, and wished them well in their future endeavors.
When he met Ambassador Cunha, President Akufo-Addo spoke of the strong ties that existed between the two countries, and the determination to build their respective nations on the basis of democratic values, and the commitment to see to the total development of the continent. 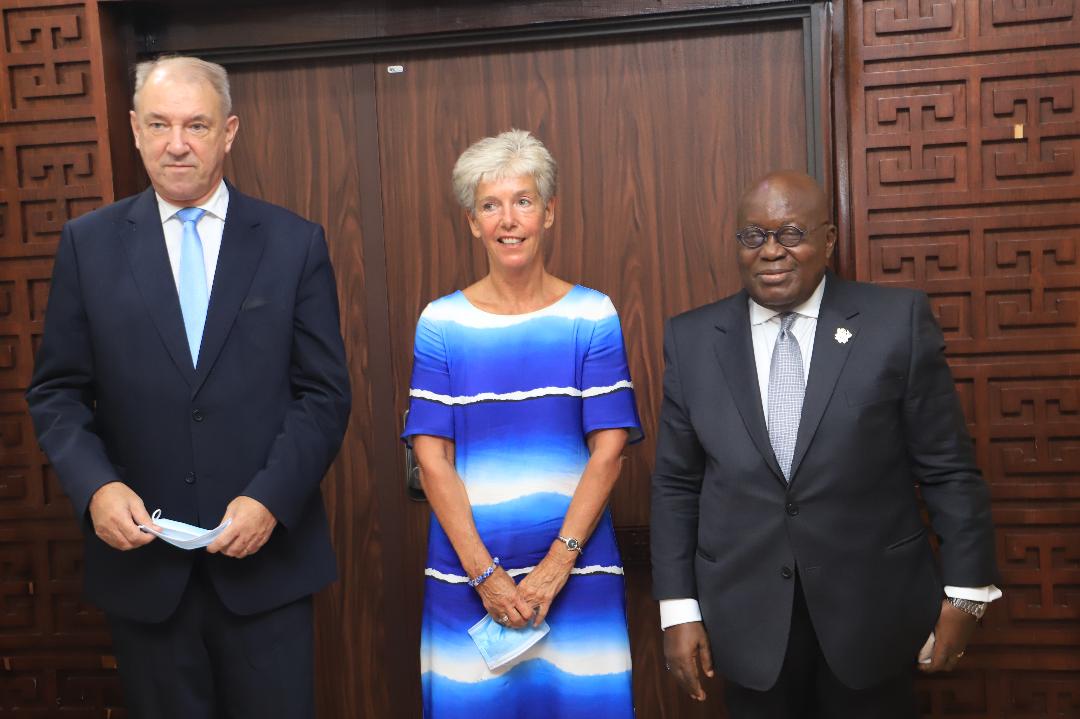 “These are the things that continue to link Angola and Ghana and I’m very happy that the visit of your President gave us an opportunity to reaffirm these common commitments that we have and also to sign these important agreements we were able to do to encourage a further strengthening of the relationship between our two countries,” he said and wished in him well in his new endeavor as his country’s envoy to Russia.
On his part, Ambassador Cunha said though his stay in the country was short, he contributed to strengthening the relations between the two countries, which led to President Akufo-Addo’s visit to Angola and the subsequent recent visit of the Angolan President to Ghana.
He said he was leaving Ghana with fond memories, and would for long cherish the Ghanaian hospitality that he had been accustomed to.
During interaction with Ambassador Strickker of the Netherlands, President Akufo-Addo described him as one of the liveliest members of the diplomatic community in Ghana and thanked the envoy for his contribution to Ghana’s development during his duty tour.
“We have lots and lots of regards for you for the works that you have done here”, he said.
The President was grateful to the Netherlands for supporting the ongoing dialogue with the European Union on sustainable cocoa production, describing the negotiations as positive, considering the importance of the crop to Ghana’s economy.
“We are clear in our mind that the support we are having from your government is one of the reasons for that…we want to put on record our appreciation,” he said.
Ambassador Strickker, who was accompanied by his wife, described Ghana as a beloved country, saying, “I just want to say that we have appreciated our period in Ghana…our last 5 years has been fantastic.”
He was happy about the collaborations between the two countries in the areas of agriculture, and in the water and sanitation sector, as well as the President’s commitment to make Accra the cleanest city in the West African sub-region.
Stricker commended President Akufo-Addo for his exceptional leadership in the handling of the Coronavirus pandemic, which had saved many Ghanaian lives.
He also congratulated the President on his re-election as President of Ghana and Chairman of the Economic Community of West African States (ECOWAS) region.
The envoy told the President that “we all in the Netherlands view Ghana as a historically, as a historic friend,” and said asked him to consider a visit to the Netherlands on his European tour, to which the President replied, that he had a reciprocal visit to that country, which he would fulfill.
Share
Facebook
Twitter
Pinterest
WhatsApp
Telegram
Previous articleLands Minister inaugurates Forestry Commission Governing Board
Next article#FixTheCountry Conveners commend Police for professionalism during demonstration