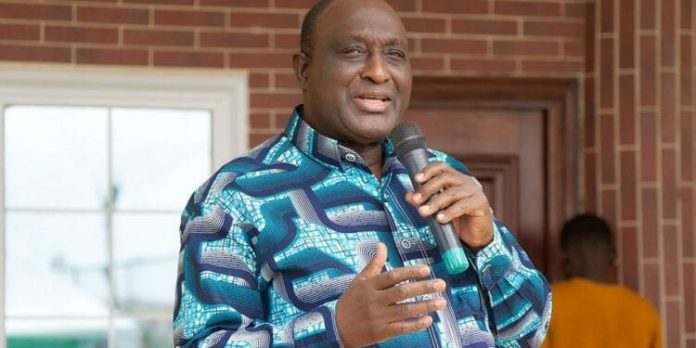 Minister of Trade and Industry Alan Kyerematen is urging all Ghanaians to get on board the newly launched Green Ghana Project as he argues that the tree planting exercise portends job opportunities for citizens especially the youth across the country.

Under the auspices of the Forestry Commission, the government of Ghana is seeking to plant five million trees across the country.

The programme after its launch on Friday, June 11, 2021 has seen many top government officials and the general public alike plant trees in their homes, schools and in other designated areas in support of the initiative.

Taking his turn to join the tree planting exercise in the Ayawaso West Municipality of the Greater Accra Region, the presidential hopeful of the New Patriotic Party (NPP) noted that planting five million trees will protect the environment from climate change and also help protect watersheds, reduce erosion, moderate climatic conditions, provide habitats for fauna and provide food for birds and other wildlife.

Mr. Kyerematen also held the view that if government’s target of planting five million trees is achieved, more jobs opportunities will be created for citizens especially the youth across the country.

He is therefore urging the general public to join hands with government to exceed the five million trees which will yield benefits for all.

The minister was accompanied by the Member of Parliament for the Ayawaso West Wuogon constituency, Lydia Seyram Alhassan, Municipal Chief Executive of Ayawaso West Assembly Sandra Owusu Ahenkorah as well as other official from the Asssembly.

The Ayawaso West Municipal Assembly has set a target to plant about 8,000 seedlings of coconut, mahogany, cedralla, cassia, militia, royal palm, and polythia for planting.