Upon his visit in Ghana, King Promise invites Chelsea’s Hudson Odoi to a football play. 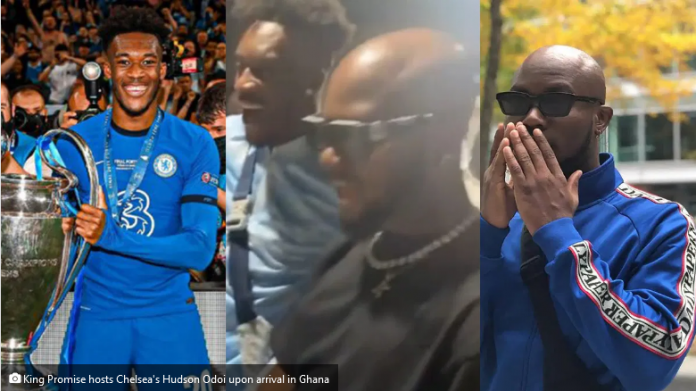 Your crooner’s favorite crooner, King Promise has welcomed Chelsea star Callum Hudson-Odoi to his motherland in a very spectacular and cultural manner.

The two Ghanaian stars were spotted last night together with their entourage at the terminal 3 arrival section of the Kotoka International Airport. King Promise pulled up a surprise cultural dance welcome for the football star who seems more than excited to see the Ghanaian culture been exhibit to the fullest.

In a separate video, the ‘Sesa’ hit maker was seen disturbing the Chelsea forward as he tries to make him speak the language of the mother tongue, Twi. Hudson-Odoi who seems to be very busy on his phone replied the Highlife musician in the local dialect that ‘he shouldn’t worry him’.

Callum Hudson-Odoi was born and raised in Wandsworth, London on November 7th, 2000 and his father, Bismark Odoi is said to be a Ghanaian and a former player of Ghana premiership side Accra Hearts Of Oak.

Hudson-Odoi has been through the ranks in Chelsea after joining the team in 2007 and making his under 18 debut in August 2016. He now wears the jersey number 20 at the club after he was promoted by Italian manager Maurizio Sarri in the 2018-19 league season.

He is part of the team that won the club’s second UEFA Champions League trophy couple of days ago after beating Manchester City in Portugal.

Before the start of the 2019/2020 league season, Callum Hudson-Odoi was at the center of transfer rumors after German giant Bayern Munich showed their interest to sign him from the London club.