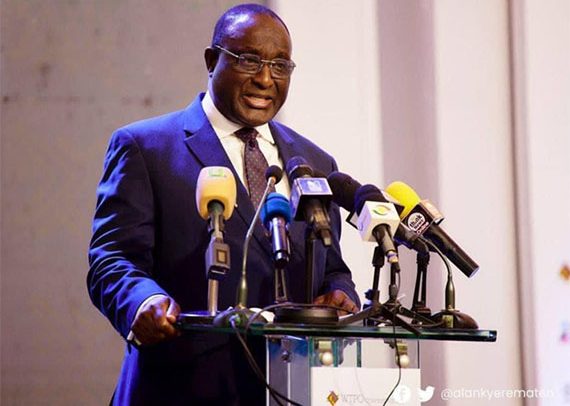 TRADE AND Industry Minister, Alan Kyerematen, has given assurance government will work feverishly to bring back Ghana’s economy on track as it engages the International Monetary Fund (IMF) for a bailout.

Mr. Kyerematen, who disclosed this on Metro TV’s Good Evening Ghana (GEG) programme, detailed how government’s economic recovery programme in the pre-COVID and post COVID-19 era were doing well only for irresistible external forces to send the economy crumbling.

Describing the causal factors as a force majeure, the Trade and Industry Minister pointed to the positive growth of the economy between 2017 and 2019 as enough reason to trust the leadership of the government to sail through the latest bailout.

Mr. Kyerematen explained that the factors that took the current government to IMF and that of the erstwhile NDC, were completely different, adding that the already existing programme tabled by the government would lessen the burden on Ghanaians.

According to the minister, the IMF exists to assist member states that needed technical and or financial aid, to help them to stand on their feet again.

In his opening speech on the show, the minister said, “There is the need to discuss this issue (Ghana’s negotiations with the IMF) dispassionately and with real facts.”

He also highlighted the tangential growth of the economy that saw the economy shore up reserves at the central bank, taming inflation, reducing debt to sustainable levels and creating trade surplus, which resulted in more exports over imports in the first 18 months of the government.

To confirm the causal factors of the sudden crumble in the economy, the Trade and Industry Minister blamed external forces for the sudden crushing of the economy, which he said as recent as May 2021, was showing signs of upward growth and resilience.

Touching on the main cause of Ghana’s return to the IMF, Mr. Kyerematen cited the impact of COVID-19 and the Russian invasion of Ukraine and its effects on economies throughout the world.

He mentioned Ghana’s slow economic growth as exogenous, but explained government’s proactive plans to curb it.

With over 100 countries seeking bailout from the IMF, the Trade and Industry Minister raised hopes for Ghanaians with detailed economic transformation plan led by industrial and agricultural emancipation.

Referring to innovative programmes such as the One District One Factory (1D1F), the minister said a total of 296 companies were at various stages of completion whilst 125 were operational.

He further alluded to the fact that both NDC and NPP needed the IMF at various points to manage to the economy, but said the systematic decline in economic indicators took NDC to IMF, while exogenous factors hauled the incumbent before the donor body.

Ghana has already started the process of getting a US$2 billion package from IMF to help complete the economic revival package put together by the Economic Management Team (EMT).

Government is yet to officially announce what transpired on its engagement with the IMF team between Wednesday and Friday in Accra.