Akufo-Addo begins the process to remove Anin Yeboah if… 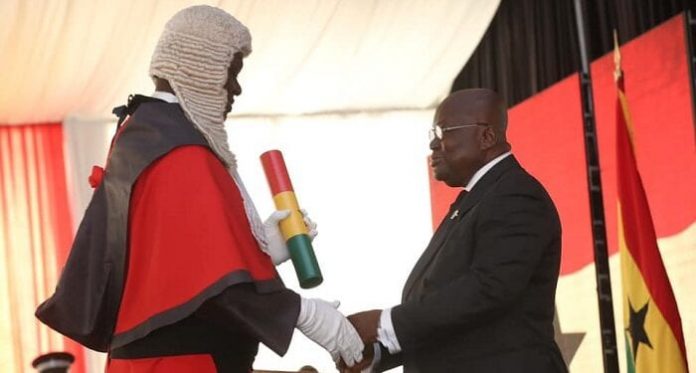 Akufo-Addo begins the process to remove Anin Yeboah if…

President Nana Addo Dankwa Akufo-Addo, in accordance with Article 146(6) of the 1992 Constitution, has begun the process to remove Chief Justice Kwasi Anin Yeboah, if found guilty of a $5 million bribery allegation.

First of all, a prima facie case should be found against the Chief Justice before the full process of his impeachment is triggered.

This was contained in a response from the Presidency to a petition filed by pressure group Alliance for Social Equity and Public Accountability (ASEPA).

ASEPA had petitioned the Presidency and the Commission on Human Rights and Administrative Justice (CHRAJ) over the allegations leveled by Kumasi-based lawyer Akwasi Afrifa against the Chief Justice.CID commences probe into $170m judgment debt

Lawyer Afrifa was responding to a petition filed at the General Legal Council (GLC) by a former client, Nana Ogyeedom Obranu Kwesi Atta II, who accused the lawyer of taking $100,000 legal fees from him when he could not continue the case.

The renowned lawyer also cited Anthony Akoto Ampaw, who has since responded to the claims made by Mr. Afrifa.

It is on the back of all these that ASEPA’s Executive Director petitioned the Presidency to trigger the process to oust the Chief Justice, who has also reported the matter to the GLC and the Criminal Investigations Department (CID) of the Ghana Police Service.

Find the Presidency’s response below: