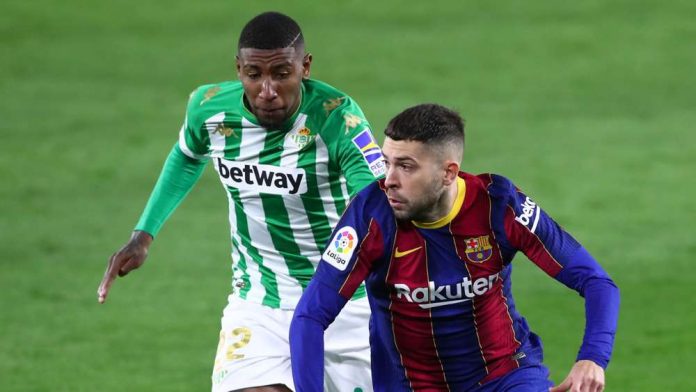 Barcelona have announced the signing of right-back Emerson Royal from Real Betis on a deal that runs until 2024.

The Brazilian had been co-owned by both Barca and Betis, with the pair having joined forces to bring the 22-year-old to La Liga in 2019.

The Blaugrana have now exercised their option to buy the player outright for €9 million (£8m/$11m), with Goal having initially reported that the deal was close on May 29.

Officially announcing the switch on Wednesday, a Barca statement read: “FC Barcelona have informed Real Betis Balompie that they are exercising their right to bring back Emerson Royal from July 1 after two seasons on loan at the Andalusian club.

“Born in Sao Paulo, Brazil on 14 January 1999, Emerson Aparecido Leite de Souza Junior, better known as Emerson Royal, is an attacking right-back who will be involved in the upcoming Copa America with the Brazilian national team.

“The defender will bring pace and an attacking dimension to the right wing as the Brazilian has scored five goals and created 10 assists with Betis, the club at which he has played since a three-way agreement was reached involving Atletico Mineiro in January 2019.”

What has the player said?

Speaking earlier this week, Emerson said: “It’s a three-year contract. They’ve always said they were counting on me for next season. Having this recognition is a great thing for a footballer.

“I’m glad, it’s a club I have dreamt of playing for since I started in football. To be recognised like that is a big thing for me. Every player wants to play for Barcelona. I want to go there and show what I can do and establish myself at my position.”

With Sergino Dest having established himself as first-choice right-back under Ronald Koeman, Emerson faces a fight to unseat the USA international.

Utility player Sergi Roberto has often filled in on the right side of defence, but Emerson’s arrival has served only to spark further rumours that the 29-year-old La Masia graduate could be sold this summer.