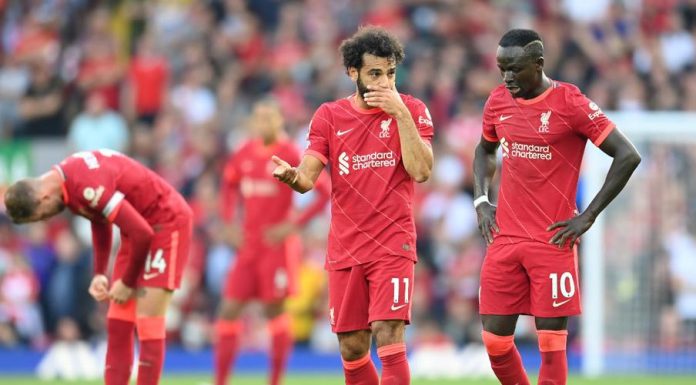 Memories will turn to one of the most famous UEFA Champions League finals as Liverpool and AC Milan kick-off Group B of the 2021/22 competition at Anfield on Wednesday at 9 pm CAT.

The sides have met only twice before in UEFA competition, both in UEFA Champions League finals, with one victory apiece.

While Milan is making their 18th appearance in the group stage – four more than their English opponents – this is the first time they have featured since 2013/14, whereas Liverpool is involved for the fifth season in a row.

Group B is completed by Atlético Madrid and Porto.

The Atatürk Olympic Stadium in Istanbul was the venue when the teams met in the 2005 UEFA Champions League final, and Carlo Ancelotti’s Milan looked set to claim the trophy for the second time in three years as they raced into a 3-0 half-time lead thanks to goals from Paolo Maldini (1) – the fastest in a European Cup final – and Hernán Crespo (39, 44).

However, Steven Gerrard’s 54th-minute header sparked a remarkable Liverpool resurgence, Vladimír Šmicer (56) and Xabi Alonso (60), following up after his penalty had been saved by Dida, bringing Rafael Benítez’s side level.

With no further goals, the match was decided by a penalty shoot-out. Serginho and Andrea Pirlo failed to convert Milan’s first two kicks and, though John Arne Riise’s spot-kick was saved by Dida, Dietmar Hamann, Djibril Cissé and Šmicer all scored, meaning Jerzy Dudek’s save from Andriy Shevchenko confirmed Liverpool’s 3-2 win.

Milan got their revenge in Athens two years later, Filippo Inzaghi striking late in each half (45, 82) at the Olympic Stadium. Dirk Kuyt’s 89th-minute effort was not enough to prevent the Rossoneri from claiming the most recent of their seven European Cups.

Liverpool is in the UEFA Champions League group stage for the 14th time; they have only failed to progress to the last 16 or further three times.

This is Liverpool’s fifth successive group campaign, all under Jürgen Klopp; runners-up to Real Madrid in the 2017/18 final, they claimed their sixth European Cup at the expense of Tottenham with a 2-0 victory in the 2018/19 final.

Klopp’s side had finished first in Group D on 13 points, ahead of Atalanta, Ajax and Midtjylland, before beating Leipzig 2-0 in both legs of their round of 16 ties with both games played in Budapest.

The Reds’ record at home against Italian teams is W8 D1 L5; last season’s loss to Atalanta made it three defeats in the last seven (W3 D1).

European Cup winners on seven occasions, Milan are making their first appearance in the group stage since 2013/14. This is the 18th time they have featured, four behind Juventus’s Italian record of 22.

Milan’s last 11 UEFA Champions League campaigns have all extended into the knockout rounds, although five of the last six have ended in the round of 16.

The Rossoneri were beaten by Atlético de Madrid in 2013/14 last 16 (0-1 h, 1-4 a) having finished second in their section behind Barcelona, picking up nine points from their six matches.

Milan has featured in European competition only three times since that 2014 defeat by Atlético, all in the UEFA Europa League. They reached the round of 16 in 2017/18, losing to Arsenal (0-2 h, 1-3 a) before failing to progress beyond the group stage the following season.

Milan won the 2003 UEFA Champions League final at Old Trafford in Manchester, defeating Juventus on penalties after a 0-0 draw, and had also lifted the European Cup for the first time with a 2-1 win against Benfica at Wembley in 1963.

However, their record in England against English hosts shows just one win in 18 matches (D7 L10). That came against Manchester United at Old Trafford in the 2004/05 round of 16 when Crespo scored the only goal of the game.

Liverpool is unbeaten in 13 games in all competitions (W9 D4), stretching back to the 3-1 loss at Real Madrid in last season’s UEFA Champions League quarter-final first leg. They were 3-0 winners at Leeds on Sunday.

The Reds started the new Premier League season with wins at Norwich (3-0) and at home to Burnley (2-0) before being held 1-1 at home by ten-man Chelsea on 28 August.

Mohamed Salah has scored in three of Liverpool’s first four league games. His goal at Leeds on Sunday was his 100th in the Premier League, making him the 30th player to reach that mark and, at 162 games, the fifth fastest.

Salah’s goal at Norwich made him the first player ever to score in the opening Premier League game five seasons in a row.

Fabinho got Liverpool’s second goal at Leeds, his first for Liverpool since 24 June 2020.

Andy Robertson won his 50th cap for Scotland in a 1-0 win at home to Moldova on 4 September.

Sadio Mané, who struck his second league goal of the season to complete the win at Leeds, scored Senegal’s first goal in a 2-0 World Cup qualifying win at home to Togo on 1 September and converted a penalty in a 3-1 victory away to Congo six days later.

Jordan Henderson made five appearances, all from the bench, as England reached the final of UEFA EURO 2020, including in the penalties defeat by Italy in the decider. He had scored his first England goal in the 4-0 quarter-final win against Ukraine, his 62nd appearance.

Trent Alexander-Arnold was named in England’s squad for the tournament but had to withdraw after suffering a thigh injury in the 1-0 defeat of Austria on 2 June.

Fabinho and Roberto Firmino were part of the Brazil squad that reached the final of the Copa América, losing 1-0 to Argentina.

Harvey Elliott was carried off on a stretcher at Leeds having suffered a suspected dislocated ankle in a tackle.

Firmino suffered a hamstring injury in the draw with Chelsea and has not played since.

James Milner has been out since 14 August with a calf problem, although he was an unused substitute at Leeds.

Milan have won their first three Serie A games this season, beating Lazio 2-0 on Sunday thanks to goals from Rafael Leão and substitute Zlatan Ibrahimovic, the latter seven minutes into his first appearance of 2021/22.

The Rossoneri started the season with a 1-0 victory at Sampdoria, Brahim Díaz scoring the winner.

Milan then defeated Cagliari 4-1, new signing Olivier Giroud scoring his first two goals for the club after Sandro Tonali and Rafael Leão had both struck early on.

That was Tonali’s first Milan goal, the midfielder having failed to score in 37 matches in all competitions during his first season with the Rossoneri.

Milan have won their first three Serie A games for the second successive season, a first for the club.

On 5 September Alexis Saelemaekers scored his first goal for Belgium in a 3-0 win at home to the Czech Republic in 2022 FIFA World Cup qualifying.

Simon Kjær scored in Denmark’s 5-0 defeat of Israel on 7 September – his first international goal for over five years.

Theo Hernández made his France debut in the 2-0 win against Finland the same day.

Alessandro Florenzi started the opening game against Turkey and was a late substitute in the final against England as Italy triumphed at UEFA EURO 2020.

Kjær played all six EURO games for Denmark, who reached the semi-finals.

Denmark captain Kjær and the Danish medical team, whose quick reactions and expertise saved the life of Christian Eriksen at UEFA EURO 2020, were presented with the 2021 UEFA President’s award in Istanbul on 26 August.

Giroud has been sidelined by illness since 2 September, while Rade Krunic suffered a calf injury while on international duty with Bosnia and Herzegovina and missed the weekend win.

In July defender Davide Calabria extended his contract until 2025.