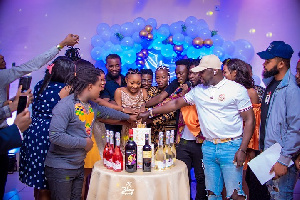 • The event was attended by some celebrities

• The actress, from the pictures available on social media, was excited

“Today is the new chapter of my life and this volume will be interesting. Another year gracing you with my presence, I’m not getting old I’m getting better” was the caption of a beautiful photo Akuapem Poloo shared on Instagram on the occasion of her birthday.

Clad in a beautiful kente cloth with pieces of jewellery to match, the actress who grinned cheerfully in the said photo was nothing short of a queen filled with immense joy.

“I’ve fought a lot of battles in life yet God has been so good to me. I’m a true definition of an African woman, my journey so far in life has been amazing and I want to thank God for that,” she said in another post.

Her birthday was climaxed with a surprised party which saw several celebrities in attendance.

Photographs from the eye-popping event which have been flooded on the social media pages of Akuapem Poloo captured movie director Kobi Rana, radio personality Ohemaa Woyeje, musician Franko Naro, actors Nana Tornado and Peter Richie as well as a number of bloggers celebrating the popular actress.

An elated 32-year-old Akuapem Poloo was seen in a nude, glitter-fill, low-back cut dress and in white heels with a big braid cornrow providing a perfect complement to her looks.

This year has relatively been tough for the actress considering a court case that resulted in her conviction. An Accra Circuit Court in April handed the actress a 90-day jail sentence for posting naked pictures of herself and her son on social media.

She was later granted a GH¢80,000 bill with two sureties by the criminal division of the Accra High Court pending an appeal of her sentencing.