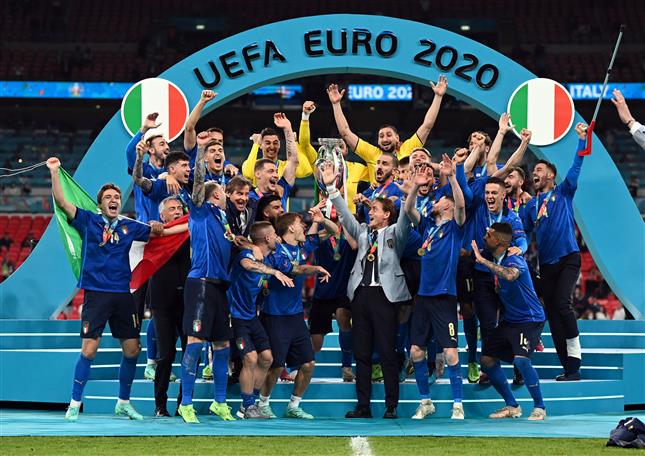 Italy claimed a first European Championship since 1968 after goalkeeper Gianluigi Donnarumma saved twice in a dramatic 3-2 penalty shootout victory in the Euro 2020 final against England at Wembley on Sunday.

After a 1-1 draw over 120 minutes, Donnarumma saved from Jadon Sancho and Bukayo Saka — Marcus Rashford also missed by hitting a post with his spot-kick — to give Roberto Mancini’s team glory in London.

Andrea Belotti and Jorginho both saw their penalties saved by England’s Jordan Pickford, but Donnarumma’s stop from Saka decided the game to hand Italy the title.

England had taken the lead inside two minutes when Luke Shaw, on the eve of his 26th birthday, scored the quickest-ever European Championship final goal after one minute and 57 seconds.

But Italy, unbeaten in 33 games ahead of this final, took the game to extra-time when Leonardo Bonucci equalized on 67 minutes. 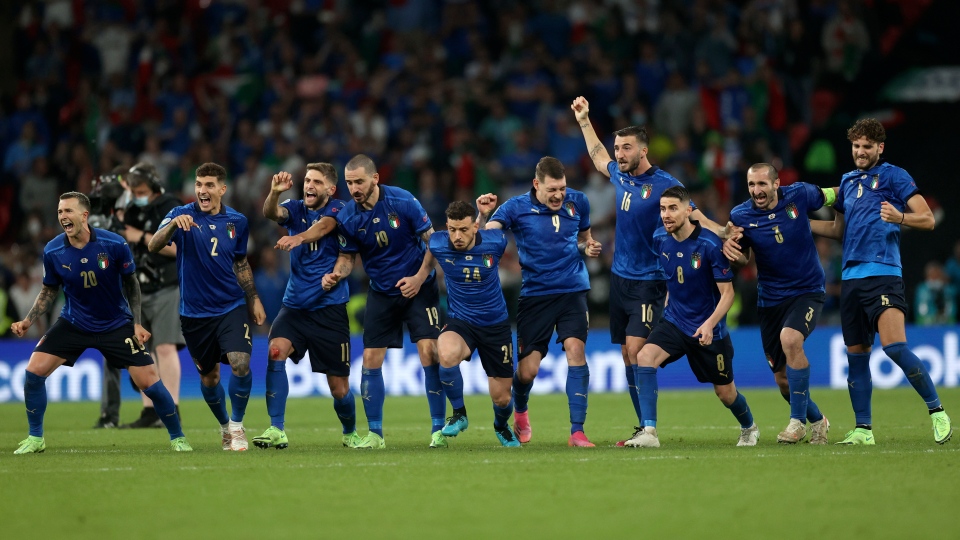 Having been outplayed early in the game, Italy grew in strength with coach Roberto Mancini making greater use of his substitutions than his England counterpart Gareth Southgate, who sprung a tactical surprise before the game.

Southgate made one change to his starting team from the semifinal win against Denmark by selecting Atletico Madrid full-back Kieran Trippier ahead of Arsenal’s Bukayo Saka, enabling his side to play with a three-man defense.

That tactical switch allowed Shaw and Trippier to play as advanced wing-backs and the plan paid dividends inside the opening two minutes when Shaw opened the scoring with his first international goal.

The Manchester United defender started the move in his own half by passing to Harry Kane before sprinting towards the Italy penalty area. Kane, meanwhile, moved the ball to Trippier on the right flank and the former Tottenham full-back delayed his cross long enough for Shaw to arrive at the far post and score with a half-volley past goalkeeper Gianluigi Donnarumma.

England maintained their impressive start, with Declan Rice and Kalvin Phillips controlling the midfield for Southgate’s team, but Italy grew into the game in the closing stages of the first-half.

Although chances were limited, Federico Chiesa went close with a low left-foot shot from 20 yards which flew narrowly wide of the England post shortly before half-time.

Chiesa’s near miss proved a warning of what was to come in the second-half, with Italy dominating the game and creating a number of chances before Bonucci levelled the scores halfway through the second-half.

Lorenzo Insigne sent a 20-yard free kick wide on 50 minutes before England keeper Pickford was forced to dive low to his left to deny Chiesa after a mazy run and shot by the Juventus forward.

Italy’s dominance was rewarded, though, when Bonucci scrambled home from close range after England had failed to clear a corner. Bonucci struck from the rebound after Pickford had pushed Marco Verratti’s header onto the post.

Southgate attempted to stem the tide for England by replacing Trippier and Rice with Saka and Jordan Henderson, but Italy continued to dictate the play and remained the team in control for the remainder of the 90 minutes and opening period of extra-time.

Aside from a 30-yard Federico Bernardeschi free kick on 117 minutes which was spilled by Pickford, clear chances were limited as the game drifted towards the end of extra-time and penalties.