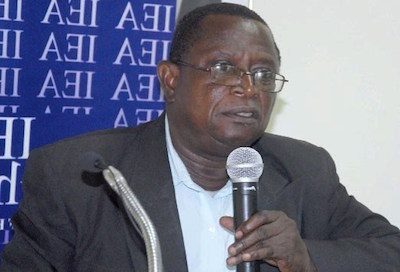 A Senior Research Fellow at the Institute for Democratic Governance (IDEG), Kwesi Jonah has called for a dialogue between the National Democratic Congress (NDC) and the New Patriotic Party (NPP) on post-election tensions to tackle the dispute over declared results.

At the moment, the two leading parties in Ghana’s political space are only “shouting at each other. They are not talking to each other,” Mr. Jonah said.

Given the near-split in Parliament and the absence of an outright Majority, he reminded that the two parties will need to normalise such dialogue.

The NPP has 137 seats while the NDC has 136 seats with one constituency’s results pending.

“A split parliament requires that the two parties should show leadership at the very highest levels. The two of them should be talking among themselves,” Mr. Jonah noted on Eyewitness News.

He stressed that the parties have “a responsibility to safeguard the peace and stability of this country.”

“I think when they sit down together to talk, they will come to some kind of understanding and maybe it will bring some finality to the problems that are ongoing right now.”

Currently, the NDC has refused to accept a number of election results, including the presidential result

The NDC is currently engaged in an audit of pink sheets but has not indicated if it will challenge the election results in court.

Its flagbearer, John Dramani Mahama, has described the Jean Mensa-led Electoral Commission (EC) as the worst the country has seen and accused it of mismanaging the electoral process.

He has also said an independent audit of the EC’s election figures is necessary to settle the tensions over the election results.

“As long as that is not done and we know there was a deliberate attempt to subvert the will of the people in favour of the incumbent, it will be wrong for me to just leave it because we will not learn the lessons of this election.”

The NPP has, however, rubbished these calls.