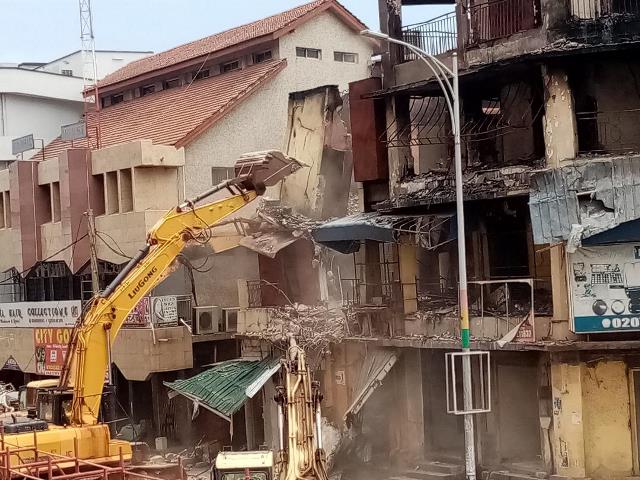 City Authorities in Accra have disclosed that the demolition of the 3-storey Building at the Makola Market in Accra, which was gutted by fire last month, would take quite a number of days to complete.

Demolition of the structure began on Sunday, August 22, 2021. Conclusions arrived at by a 7-Member Committee set up to probe the incident stated that the building had no structural integrity and needed to be pulled down to avert further damage and hence, make way for fresh construction.

Speaking to GBC News, Head of Public Affairs of the Accra Metropolitan Assembly, AMA, Gilbert Nii Ankrah, said the Assembly will provide support and ensure the safe demolition of the building, adding that, the exercise may take some days to complete.

Mr. Ankrah announced that the affected traders would be duly compensated.

It is being carried out by the 48 Engineers Regiment of the Ghana Armed Forces, officials of the National Disaster Management Organization, NADMO and the Ghana National Fire Service.

The area had been cordoned off amidst the heavy presence of the Police, and officials from the Electricity Company of Ghana, ECG and a Sanitation Taskforce responsible for the Central Business District.

Only the media and representatives of owners of the ravaged building and the houses within the enclave were allowed access to the site.

Addressing journalists, Head of Public Affairs of the Accra Metropolitan Assembly, AMA, Gilbert Nii Ankrah, said the Assembly will provide support and ensure the safety of the public during the exercise.

He added that the Ministry of Trade and Industry and allied partners would team up to ensure that the affected traders are adequately compensated.

“The building got burnt and it is weak in structure and should be pulled down. That is why we are here as an assembly with our task force to ensure everything goes on smoothly. The military is handling the exercise and it will take some time. Per the reports, it is quite clear that the Ministry of Trade has finalized all compensation packages for the victims,”  the PRO explained.

Mr. Ankrah appealed to those who have shops in the building to exercise restraint and stay away from the area to allow the exercise to go on smoothly.

“As an assembly, we acknowledge the contribution of the Informal Sector to the economy. As a result, we want to urge shop owners within this enclave to be patient with us and cooperate with us so that whatever exercise is being done will be completed successfully so that they can come back and go about their daily activities without any form of casualties,” he stated.

Due to the heavy presence of the Military and Police, only a handful of people gathered at a distance to witness the exercise. The 3-story building was ravaged by July 5, 2021. It destroyed all kinds of wares ranging from cosmetics, fabrics, and hair products among other items. More than 100 Wholesale and Retail Shops are believed to have been affected by the inferno.