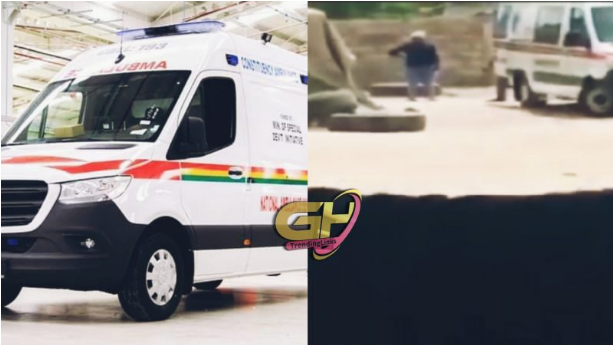 Management of the Ghana National Ambulance Service has revealed that it is on a hunt for a driver who used of the recently acquired vehicles to cart bags of cement at a yet to be identified location.

Deputy Director in Charge of operations Foster Ansong-Bridjan who revealed on an Accra-based radio station, described the conduct of the driver in question as very unlawful.

“I am currently at our training school at Nkenkansu when someone sent the video to me. As Deputy Director in Charge of Operations, I have relayed the information to all our Regional Administrators to fish out the particular driver who used an ambulance to cart bags of cement”, he revealed.

According to him, he is still waiting for updates from Regional Administrators in order to take the needed action depending on officials of the station involved.

Mr. Foster Ansong-Bridjan explained that even if he transported a case and was returning to his station, you could be relied on for other emergencies including an accident on the way.

“You can be called upon to attend to accident victims while on your back to a station even if he went somewhere with a case. If you use the ambulance to convey goods that prevents you from attending to accident victims it is not good. As part of our rules and regulations, it is unacceptable. The only thing you are allowed to do is cart consumables for your operational duties”, he explained.

A video has gone viral on social media, in which one of Nana Addo Dankwa Akufo-Addo’s ambulances has been used to transport cement.

Sources indicate that he ambulance was being used somewhere in Gomoa East, specifically around the Budumburam area in the Central Region for this unlawful purpose.